What did stars in L.A. crave on Thursday night? Pizza and pasta.

And, arguably, there’s no better place to grab a bite in the City of Angels than Jon & Vinny’s, the ultra popular eatery that welcomed Chrissy Teigen and her army of friends for a celebration. There the model and mom to little Luna Legend fêtedher new casual-cool “On Duty” collection for A.L.C. and Intermix.

Naturally, she stole the show in a pair of army green zip-front pants ($368; intermixonline.com) and a crisp white shirt she styled in tied-up crop-top form and spent time at the event with her hubby, John Legend, and Hollywood’s go-to hairstylist Jen Atkin (above) .

Also in L.A., fresh faces flocked to Variety’s Power of Young Hollywood event, where Zendaya, Chloë Grace Moretz, and Yara Shahidi came together in ultra fab, youthful looks. And stars continued to keep the movie circuit abuzz, with Robert Pattinson making a rare appearance at the premiere of Good Time and Kate Beckinsale capturing everyone’s attention in a tulle Marchesa gown at the premiere of The Only Living Boy in New York.

In Manhattan, Kristen Bell and Taye Diggs joined food industry favorites Bobby Flay and Tom Colicchio at Little River to kick off Naked Juice’s 2017 #DrinkGoodDoGood campaign. To participate, simply take a selfie with a fruit or vegetable (you read that ride), use the aforementioned hashtag, and make sure Americans living in communities of need receive 10 pounds of produce all from imply hitting “share.”

at the New York premiere of Ingrid Goes West.

at FEED's sixth annual Party Under the Stars.

at The Honest Company and The GREAT's adventure in East Hampton.

at the premiere of The Only Living Boy in New York.

at the New York premiere of Good Time.

at the premiere of The Glass Castle.

at the premiere of The Glass Castle.

at the sneak peek of Netflix's True and the Rainbow Kingdom.

at The Hamptons Paddle and Party for Pink to benefit the Breast Cancer Research Foundation.

at the 2017 #DrinkGoodDoGood campaign launch.

at the 2017 #DrinkGoodDoGood campaign launch. 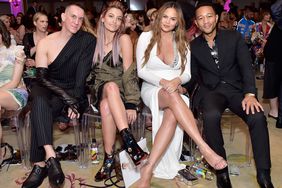