Samira Wiley's "Magical" Proposal Story Will Make You Tear Up

It may have been the year of celebrity breakups, but 2016 also gave us some amazing love stories, including this one! Samira Wiley, who plays Poussey on Orange Is the New Black, got engaged to show writer Lauren Morelli back in October, and the adorable couple recently spoke out about their "magical" engagement. Get your tissues ready.

The big ask happened at the couple's home in Los Angeles—they were preparing to take a trip to Palm Springs when Morelli popped the question.

"[Morelli] asked me to sit next to her," Wiley told Out magazine. "Then she got me up, and we started dancing together, and she pulled a ring from behind the couch. Lauren has been married before, so I wanted her to tell me she was ready, her to be the one to propose."

Wiley didn't see the proposal coming, since she thought her girlfriend needed more time: "I didn't know she was as ready as she was. I was completely shocked. I was crying uncontrollably."

Orange Is the New Black's Samira Wiley Is Engaged!

Morelli explained that she was so nervous before she asked and even more nervous when Wiley wouldn't stop crying!

"I found a ring, and they shipped it to me, and it was as if someone had handed me a ball of fire and said, 'Here, tend to this.' I was so nervous and terrified she knew it was coming, but she was so shocked that I couldn't get her to stop crying," Morelli told Out. "She was very clear she'd wait for me to be ready, so to give her something I knew she wanted so much was incredible. It was the most magical day of my life."

VIDEO: How to Accessorize for a Winter Wedding 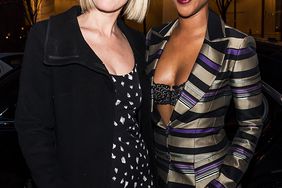