We talked to the most decorated gymnast in history, as she got glam for the InStyle Awards, about redefining greatness and what comes next.

Simone Biles is the greatest gymnast of all time, full stop. She hasn't lost an all-around title since 2013 and has so many medals that when asked, she often forgets the exact number. (It's 32, seven of those Olympic medals). But even more impressive and legacy-making than her physical greatness — and she has nailed moves so challenging no one else has dared to even attempt them, calling into question the entire gymnastics scoring system — is her courage to speak her truth at all costs. In doing so, she has redefined the very meaning of greatness as far more than just amassing the most medals.

It's why Biles was honored with 'The Original' award at the 2021 InStyle Awards on Monday night — the title we give to someone who isn't afraid to stand up for what they believe in, speak their truth, and be an inspiration for others.

When I catch up with Biles over Zoom a few days before the ceremony, she's just returned from a grueling 35-city gymnastics tour and has a rare moment of downtime. She got a massage with her boyfriend, NFL player Jonathan Owens, and is enjoying the time to hang out with her dogs. Soon she'll be getting braids and going into full glam mode — something that Biles says actually kinda stresses her out. In fact, not experiencing anxiety while walking a red carpet "is a huge feat for her," she shares. That may sound surprising considering none of us have probably truly known stress quite like an Olympic athlete, but mastering the dress code, finding the right stylist who really knows your body, all of it can be "complicated and scary," she says. (Not a glimmer of fear comes through in her getting-ready video diary, above, just excellence and shine and glamour. But they don't call her the GOAT for nothing.)

Complicated and scary also happen to also describe Biles's experience this summer at the Tokyo Olympics after developing the "twisties." Biles received scrutiny from those who had trouble understanding what the cute-sounding name actually referred to: a mental block that causes a gymnast to lose their spatial awareness in the air. And when you "literally can not tell up from down," as Biles explained on her Instagram story at the time, it puts you at risk for serious injuries. So yeah, scary. She made the decision to withdraw from the Olympics in order to focus on her mental health, sparking long-overdue conversations about mental health and the overwhelming pressure we put on athletes from a young age.

"Most people are like, Oh, well that's not an injury and mental health shouldn't be taken that seriously, but just because you can't see it doesn't mean [it isn't real]. It's basically the same thing as an injury and that's how I go about it," Biles tells me. "Speaking up for myself, putting my mental and physical health first — that's what Tokyo has taught me."

To Biles, that's why being honored as The Original is so meaningful. "When I think about being an original, I think it's about staying true to yourself in all aspects of your life, whether it's your work life, your personal life, or your style. It's embracing the idea that you do you," Biles said in her acceptance speech on Monday night at the Getty Center, where her friend, the poet Amanda Gorman, honored her with an original poem, "The Greatest."

"Simone has showed that power is listening to a voice that is your own, that greatness lies not in if we've won but if we've grown, and that if one woman speaks her truth, she is never alone."

"I am here to celebrate the symbol that is Simone, most well-known for being the most accomplished gymnast of our time," Gorman's piece began. "But it is time we see Simone as far more than her 32 medals. She is a champion because she never settles for less than the rebel she is."

She continued: "Simone has showed that power is listening to a voice that is your own, that greatness lies not in if we've won but if we've grown, and that if one woman speaks her truth, she is never alone." (The feeling is mutual, by the way. "I think she is the epitome of female empowerment and always stands for what she believes in. And not only that, she's brilliant," Biles says of Gorman.)

Biles says the outpouring of support she received has finally shown her she's more than gymnastics, more than her accomplishments. So as for retiring, her mind isn't yet made up. "I wouldn't say the door's closed, but it would definitely be hard representing USA Gymnastics again because of everything that we've gone through. They haven't reassured us that it's not gonna happen again," says Biles, who is the only survivor of the Larry Nassar sexual abuse scandal who is still competing professionally.

At 24, Biles says she really has no idea what she'll do next. "That question is so hard to answer because if people are in school for four years, they study something, they get a degree, they graduate and then everybody's like, well, what are you doing? For me, I've studied this for 18 years of my life and I'm going to graduate and be like, what do I do? I have no idea. I'm trying to figure it out," she says. "I feel like even though gymnastics was a huge part of my life, there are still things to accomplish out of it. I'm focused on finding out what those dreams and goals are outside of the sport."

In the meantime, a few goals she has for 2022: "Being more independent, believing in myself and my abilities outside of the gym a little bit more," she says. "And you know what I'd say? Focusing on myself, being a good girlfriend, a good daughter, a good sibling, a good friend. I feel like there's still so much that's ahead of me."

Whatever it is, she'll probably do it so well they name it after her. After all, she's the Original.

Here, Biles shares the SK-II products she used to get ready for the InStyle Awards: 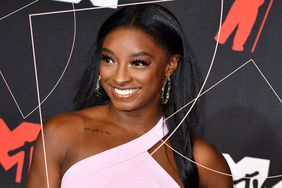