"Grrrrrrrrrr. F—kity f—k why don’t you watch my film before you judge it? FURY," the singer responded.

Sia is drawing criticism after the trailer for her movie, Music, was released. The movie, which stars Kate Hudson and Leslie Odom, Jr., follows a teenager (Maddie Ziegler) with autism who has a passion for music.

The singer faced backlash for casting actress Ziegler as a character with autism instead of an actor with autism, and was condemned by advocates for what some have deemed an offensive portrayal of people with autism.

After the trailer was released, people began tweeting at Sia, calling out the singer for excluding people with disabilities and autism, as well as for working with Autism Speaks, an organization that has been denounced by many autism advocates.

Sia responded to multiple tweets criticizing the film, writing to one person, "I cast thirteen neuroatypical people, three trans folk, and not as fucking prostitutes or drug addicts but as doctors, nurses and singers. Fucking sad nobody’s even seen the dang movie. My heart has always been in the right place."

However, it didn't help matters when the singer doubled down, tweeting, "Grrrrrrrrrr. Fuckity fuck why don’t you watch my film before you judge it? FURY," as well as accusing someone of being a "bad actor" when they wrote, "Several autistic actors, myself included, responded to these tweets. We all said we could have acted in it on short notice."

As Sia continued to go on the defensive, some, including actress Franchesca Ramsey, pointed out that the singer could benefit from listening to criticism from communities she's portraying, and pointed to Anne Hathaway and Lupita Nyong'o as examples.

After facing criticism for basing her Us character on someone with Spasmodic Dysphonia, Nyong'o issued a statement, writing, “In my mind, I wasn’t interested in vilifying or demonising the condition. [...] So as much as it is in a very genre-specific world, I really wanted to ground her in something that felt real. So for all of that, I say sorry to anyone that I may have offended.”

Hathaway recently apologized to the disabled community after her character in The Witches reboot was met with backlash over its portrayal of people with physical disabilities.

"As someone who really believes in inclusivity and really, really detests cruelty, I owe you all an apology for the pain caused," she wrote. 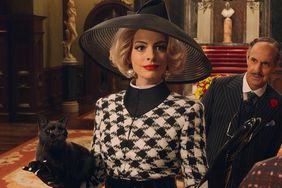