Her style impact is felt on (and off) the court.

On the morning of August 11 in a beautifully penned essay for Vogue, Serena Williams – the greatest athlete of all time – revealed her decision to "evolve away from tennis," prioritizing her growing fashion empire, venture capitalism, and being a mother.

It's difficult to condense such a milestone-filled career into a few paragraphs, as her tennis accomplishments alone would create a list the size of a CVS receipt and include her 23 Grand Slams, the most by any player in the Open Era and the second-most of all time just behind Margaret Court. It's also almost impossible to touch on Williams's cultural impact on tennis (and the world at large) without talking about her influence on its fashion.

Williams burst onto the scene in her first pro match in 1995, dominating from the start, and in September 1999 won her first of many Grand Slams. While her win should have been the primary topic of conversation, the braids and hair beads she and sister Venus wore (and would continue to wear for many years — and at some points even being penalized for) took center court. Black women's hair in professional settings has long been scrutinized, and Williams's continued adherence to her signature style gave young Black girls and Black women everywhere a model of confidence and pride.

In August of 2018, nearly a year after welcoming the birth of daughter Alexis Olympia Ohanian, Jr. in a complicated delivery that resulted in a C-Section, Williams wore a striking black catsuit with a red compression waistband — a design specifically made for her by Nike to prevent blood clots. Williams said the catsuit made her feel like a "warrior princess" in a nod to the film Black Panther.

Officials, however, were not pleased with the look, as compression bodysuits are not allowed by the French Open. Bernard Giudicelli, the president of the French Tennis Federation banned the catsuit, saying, "You have to respect the game and the place." It is unclear how wearing a potentially life-saving device is the antithesis of "respecting the game," but Williams accepted the criticism that the catsuit would "not be welcome back" at Roland Garros again. Let's just say Williams (and Nike) would have the last word.

As a direct result of the banning of her catsuit at the French Open, Williams showed up to the first round of the US Open dressed to make a statement. She sauntered onto the court wearing a custom black tutu from the late designer Virgil Abloh's collaboration with Nike, a "ladylike" addition to her tennis wardrobe, and a tongue-in-cheek olive branch as a show of her "respect" for the game. In the second round, Williams donned a second tutu — this time in lavender — and gave the audience a ballerina twirl.

In Melbourne for the 2021 Australian Open, she dazzled while paying homage to track and field athlete Florence Griffith-Joyner — or Flo-Jo as she was more affectionately called — in a custom piece from Nike. Wearing an asymmetrical pink, black, and red unitard, Williams left her left leg exposed in a biker short-length cut as a tribute to Griffith-Joyner's signature "one-legger" style. Williams told The Guardian, "I was inspired by Flo-Jo, who was a wonderful track athlete…her outfits were always amazing."

Of course, Serena Williams's statement-making fashion sense is not always confined to the court. Williams launched her eponymous fashion brand, S by Serena, in 2018 to great success, including the launch of a Xena Collection. In the spring of 2021, Serena, having been Stuart Weitzman's ambassador for some time, returned with the #FootstepsToFollow campaign, featuring daughter Olympia which focuses on how to be a positive influence. This may have been the start of the gears turning, and her leaning more into the challenging role of motherhood, and ultimately deciding how she wanted to shape her legacy.

If one thing's for certain, it's that Williams doesn't make any decision in haste, so while we will miss her, we are extremely excited for what's to come. She'll always be the queen of our court. 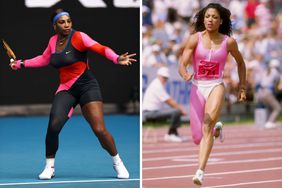