Here's what we know about Only Murders in the Building so far: it stars Selena Gomez, Steve Martin, Martin Short, and a collection of very good N.Y.C.-appropriate coats that may rival Nicole Kidman's The Undoing wardrobe. Much of our limited understanding of Hulu's upcoming series comes from one of the most hated forces in Hollywood: the paparazzi.

There are pages and pages of images that feature Gomez (in a good coat) looking pensive outside a Manhattan building. Most of these were clearly taken while the series was shooting, but then, buried in the rubble, is an image of a face mask-clad Gomez flipping off the paparazzi on her tail.

"Somebody was being disrespectful," Gomez told The L.A. Times of the uncharacteristic moment, "And I don't do well with that."

"Look, I am a very modest person, until you disrespect people," she continued. "Maybe [it wasn't] my best moment, but a girl's gotta do what a girl's gotta do. And I felt very OK with being like … 'Don't talk to people that way!'"

That, of course, isn't the only paparazzi drama to circle the set. Images of Gomez linking arms with her co-star, Aaron Dominguez, set the "Selenators" into frenzy, posting aggressive comments on the actor's Instagram.

"We had just started working together," Gomez explained. "I honestly thought, 'No wonder guys don't want to date me!' I think people only care because I'm young, and the older I get the less they'll care. For now it's a part of the job that I don't really like. I'm actually grateful that I'm not involved with anyone right now."

Given Gomez's fraught relationship with the paparazzi, the multi-hyphenate decided not to watch the much-discussed Britney Spears documentary Framing Britney Spears.

"I've seen so much, and it feels violating for me to watch something like that," she said. "I couldn't even imagine. I have nothing but sympathy for her, and I'm happy as long as she is healthy and happy." 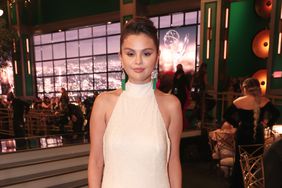 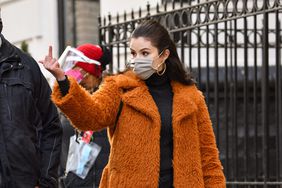