And there was a Colin Jost cameo, too.

This week's episode of RuPaul's Drag Race featured not one, but two, special guest appearances. Scarlett Johansson had the honor of introducing the queens to the challenge of the week, but her husband, Colin Jost, also popped in to drop a pun before the contestants prepped for acting in front of a green screen.

"Hey girls! how's it going? It's Scarlett. I'm such a fan of the show," Johansson said via a video call, much to the surprise of the queens. "I'm so sad I have not been in the workroom but it's been a dream of mine to participate for a long long time so this is really exciting for me."

Naturally, the queens were more than just a little enthusiastic when she appeared on the screen.

"Baby, you're in the workroom right now!" Rosé added.

Scarlett Johansson Says She's "Made a Career" Out of "Embarrassing" Controversies

When the queens asked Johansson for some acting tips, she offered some very useful information, though it's clear that none of this season's queens would be battling Thanos anytime soon.

"Acting is all about making a situation that's unreal feel very real," Johansson said. "So, I would say that the most important thing is that you have a lot of conviction, whether you're fighting Thanos or, like, a giant spiky heel. That comes from believing in yourself, if you don't believe in yourself then no one in the audience is going to believe you."

And adding another surprise to the whole situation, Jost popped into the frame to offer a quip: "I have one guest question. The movie, will it be called Size Queens?"

Without hesitating, Rosé had a comeback ready. "Hopefully, because you're looking at a roomful of size queens," she said. 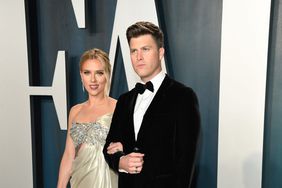