NBC Peacock's Saved by the Bell reboot landed itself in hot water with Selena Gomez's fans, after airing an episode that seemingly mocked the singer's 2017 kidney transplant surgery.

In a scene from the new series that's been making the rounds on Twitter, two students argue over the identity of Gomez's kidney donor. After losing access to their phones, one character is convinced it's "Justin Bieber's mom," while another says it's actually Demi Lovato. (Both are wrong: Selena previously confirmed friend Francia Raisa donated her kidney.)

“I know for a fact that Selena Gomez’s kidney donor was Justin Bieber’s mom,” one character said. “God I wish that I had my phone so I could prove it.” The other student replied, “Prove what? That you’re an idiot. It was Demi Lovato’s kidney. They’re best friends, like you and I were.”

In the next scene, graffiti in the school's hallway reads, "Does Selena Gomez Even Have A Kidney?"

On Saturday, Selenators took to Twitter to express their outrage over the jokes, with the hashtag "Respect Selena Gomez" trending on the app. Meanwhile, a Change.org petition with more than 4,000 signatures called for the show to be canceled.

In response to the backlash, Peacock issued an apology, as well as a donation to Gomez's charity for lupus research. "We apologize. It was never our intention to make light of Selena’s health. We have been in touch with her team and will be making a donation to her charity, The Selena Gomez Fund for Lupus Research at USC," the show's executive producers said in a statement via People.

Following a longtime battle with lupus, Selena revealed that she received a kidney transplant from Raisa in 2017. "There aren’t words to describe how I can possibly thank my beautiful friend Francia Raisa," she wrote on Instagram at the time. "She gave me the ultimate gift and sacrifice by donating her kidney to me. I am incredibly blessed." 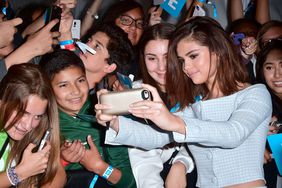