And she talked about Miss Congeniality 2.

Statement-making pants aren't just for off-duty models. Sandra Bullock eschewed her usual red carpet glamour for a pair of chaotic pants during a stroll through New York City as she headed to The Late Show With Stephen Colbert. Bullock, who is making the rounds to promote her new movie, The Lost City, wore a powder-pink blazer over a dark crop top and wide-leg pants that featured a kaleidoscope of pastel shades, including buttery yellow, pink, and coral.

Bullock added a pair of pointy-toe pumps to the look and wore her hair in her signature dark waves. While we're used to seeing her in cozy sweaters while she's on-screen, her red carpet options have usually veered more towards glitz. This low-key look puts her in the same ranks as Bella Hadid and just about everyone else, who have opted for loose, comfortable pants as a way to transition from 24/7 athleisure to more formal dressing.

Bullock recently spoke about how she's changed her mind about making movie sequels. The two she has done in the past have been well, less than great (Miss Congeniality 2: Armed and Fabulous and Speed 2, in case you've forgotten), but she's open to making a second Lost City movie if the script was good enough.

"I had a 'no sequel' rule when I didn't have the benefit of fighting for what I really wanted. I feel like, in my old age, I'm learning to fight for the things that I think would be best on screen — and I don't care who comes away from the meeting angry," Bullock said at South by Southwest. "I don't know that I'd want to do a sequel, but look — we had Dana Fox as a writer. If [writer] Dana Fox could come up with something brilliant ... there you go." 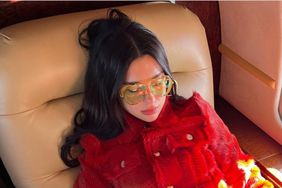