"I think she's smart to want to be Spanish … we're cool."

Oscar-nominated actress and Instagram bikini model Salma Hayek has weighed in on the scandal that has (for some reason) plagued our mind for weeks: Hilaria Baldwin's Spanish heritage — er, well, lack thereof.

Hayek has worked closely with Hilaria's husband, Alec Baldwin, both as a guest star on 30 Rock and later on the 2019 comedy Drunk Parents. Since Hilaria's heritage was called into question in late December, everyone who's ever met the yoga instructor or her husband has been subject to interview questions regarding the viral controversy.

While on Radio Andy, host Andy Cohen broached the topic with Hayek. But the actress, who's been doing this for a while, had a very diplomatic response.

"A lot of my friends asked me, 'Did you hear about this? Oh my god!'" she said in regard to the scandal. But, somehow, Hayek can relate. "We all lie a little bit," she allowed. "She makes my friend happy."

Hayek admitted that she, too, had been hoodwinked, bamboozled, led astray …

"She fooled me because she's such a good mother and she has five of them!" Hayek said, but also, "I don't care."

The actress clarified that she didn't intend to "betray or hurt anybody's feelings" with her response, adding, "I don't know if it's right or if it's wrong." But, at the end of the day, she's "not going to judge somebody just because of that one thing."

Having Spanish ancestry herself, Hayek said she felt "honored" that Baldwin emulated her heritage. "It makes me feel proud that people are inspired," she noted. "I think she's smart to want to be Spanish … we're cool."

"It is a bizarre story," Hayek admitted, "but don't we all create our own character in life?" Fair, but you can do that without appropriating someone else's culture …

"She's not a bad person," Hayek concluded, "[she's] a good person, a good mother, and a good wife. She makes my friend happy, she's very kind to me, and that's all I care about." 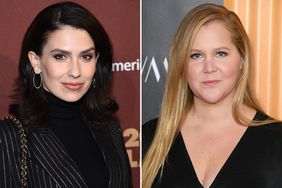