Ryan Reynolds is opening up about that T. Swift song which names his and wife Blake Lively's three daughters — James, Inez, and Betty — and reveals their youngest's name for the first time. Spoiler: He's happy about it. (I mean, who wouldn't want to be a part of a Grammy-winning album, right?)

During a SiriusXM Town Hall with Jess Cagle, the Free Guy actor confirmed for the first time that Taylor Swift's song "Betty" is, in fact, the name of his and Lively's youngest daughter. Their other two daughters' names are also included in the song, which is on Swift's 2020 album Folklore, which took home the Grammy for the 2021 Album of the Year.

"I mean the names are of our kids, but we trust her implicitly and she's very sensitive to any of that stuff," Reynolds shared. "And obviously the song has nothing to do with our kids other than our kids' names."

The Deadpool star went on to say he was actually very honored by the gesture. "We thought it was pretty, pretty damn amazing. We still do," he added. "You know, I still walk down the street and shake my head thinking 'I can't believe that happened.'"

Reynolds also revealed that he and Lively didn't tell their three girls that their names would be in the song until after it had been released. "We surprised them with it. Yeah. They didn't know," he said. "They had no idea. We don't tell them anything."

He jokingly added, "We find they're most compliant if you offer them no access to outside information."

The couple has been friends with Swift for a long time. In fact, Lively posted the sweetest Instagram in honor of the singer-songwriter's birthday last December.

"...There was happiness because of you♥️," Lively wrote. "Happy happy birthday." 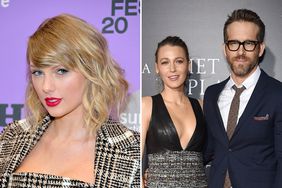