From lace-hooded dresses to colorful coifs and makeup tattoos, we scouted out the runway looks that would make any resident of the Capitol drool with desire.

Alexis Mabille
French designer Alexis Mabille went mad for monochrome when he presented his Spring 2012 couture collection. Each model's face was painted to match the rainbow-bright shade of her ensemble, an oversized tissue flower in the corresponding hue perched upon her head.

Coral-hued lace and seashell-trimmed platforms transformed the models into chic underwater creatures as they walked the runway in the label's spring collection. The delicate headpieces provided a finishing touch that was both futuristic and quintessentially feminine.

Presented as a tribute to Amy Winehouse, Gaultier's couture catwalk buzzed with a retro 50s vibe. Those looks that weren't a literal translation of Winhouse's aesthetic, like this electric blue crepe dress, still channeled the singer's signature bouffant hairstyle and thick cat-eye liner.

Inspired by the life cycles of snakes and butterflies, Giorgio Armani's models looked like they were mid-metamorphosis as they strutted the runway in the Italian designer's Spring 2012 couture collection. Shiny fabrics, sequined bodices and scale-shaped mesh, all in absinthe green shades, created an illusion that was divinely serpentine.

Recognize this dress? In January, Gaultier sent a model down the runway in this see-through lace design, a matching orange beehive, fire engine red tights and eye-catching platforms. The following month, Fergie walked the red carpet at the 2012 Grammy Awards wearing the daring creation.

After seeing the movie Black Swan, Gaultier took his Fall 2011 Couture collection to the ballet. Feathers, full skirts (maxi tutus?) and severely simple hair and makeup were the designer's vision of the dark side of dancer style. 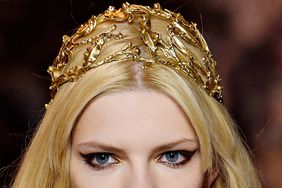 The Cure for the Common Party Look