"This has been a really challenging year for the both of us."

On Monday, Rosario Dawson offered up some words of support for her boyfriend, Senator Cory Booker, after he announced that he was ending his 2020 presidential campaign. Despite the undesired outcome, Dawson seems optimistic about the future (her own and the country's).

"Cory, you continue to inspire me everyday. On this journey you and your remarkable team have represented the best in us and I know you will continue to," she tweeted. "Thank you. I see you. I love you."

A few days earlier, at the Television Critics' Association Press Tour in L.A., Dawson was an open book about the relationship that almost made her First Lady. As it turns out, there's some truth to the idea that all she and Booker do is talk about politics — but she's quick to counter that there's a reason for it. She's been so involved in politics lately that it only makes sense.

"That's not all we talk about, but we definitely do a lot, you know, especially with everything that's going on. And it's kind of interesting because I feel like I've navigated that world a lot because of my voting organization and the activism and advocacy work I've done," she told InStyle. "We have a lot of people and friendships and situations and moments in common over these years. But now there's a whole other layer that I'm getting exposed to in this entire process. I've been to debates before, but I was never blowing kisses at one of the candidates."

Dawson added that having Booker travel so much did make things hard for the two of them, as with any couple who find themselves on opposite coasts.

"This has been a really challenging year for the both of us," Dawson said. "I'm a hugger, and people know that about me, which is difficult when you're also having a long-distance relationship." Though "touch" might be her primary love language, she says she gets by with "words of affirmation" and "acts of service."

"You have to be thoughtful and specific and conscious about the way you want to be loved," she added.

When they're not talking policy, they're just like any other couple, Dawson insists. Thankfully, they're into the same shows, books, and music. Dawson says that they share something even better than all that, though: curiosity.

"So, we're Trekkie's and we're really obsessed with Star Wars right now because of The Mandalorian and I just love that he kind of unwinds in the same way that I do," she said. "And yeah, we're just really curious about everything. And so we do poetry with each other. There's a lot of music. He does [a] music playlist and we read to each other. We're in the middle of a Kurt Vonnegut book right now."

Rosario Dawson and Cory Booker Made Their Relationship Campaign-Official

Though she may be not be campaigning anymore, it's clear that Dawson's activism — which she calls "actravism" — won't be slowing down. According to the Washington Post,her voting initiative, Voto Latino, "registered 200,000 voters last year and their leadership seminars have produced some elected officials." She's also thought about going back to college to learn about "regenerative farming and soil practices to capture carbon."

And it's certainly not the end of Dawson's involvement in American politics. Back in 2016, she endorsed Bernie Sanders and acted as a surrogate for the candidate, so many have speculated that there could be a repeat performance this year. Dawson hasn't officially announced her new presidential pick just yet, but it's almost guaranteed that she won't be quiet about it when she does.

With reporting from Carita Rizzo. 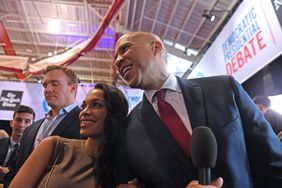