I know, it burns.

Dear Reader, it is with the most sincere regret that this author inform you that the duke (a.k.a. Regé-Jean Page) is a taken man.

On Wednesday, the Bridgerton star, styled to perfection, arrived at the 2021 British GQ Men of the Year Awards hand-in-hand with his lady, copywriter and soccer player Emily Brown. And the awards ceremony is the pair's first major public appearance together, confirming their relationship. The two have been photographed out and about together, but I was in denial.

At the event, Page was honored with the Standout Performance of the Year Award for his portrayal of the Duke of Hastings in Shondaland's smash hit. Unfortunately, the crowd favorite will not be returning for season two of the series, which is currently in production. He shared the heartbreaking news back in April.

"The ride of a life time," he wrote. "It's been an absolute pleasure and a privilege to be your Duke. Joining this family — not just on screen, but off screen too. Our incredibly creative and generous cast, crew, outstanding fans — it's all been beyond anything I could have imagined. The love is real and will just keep growing ❤️❤️❤️💫 ." 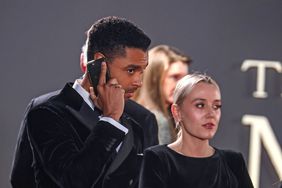