She finally confirmed they were a couple, two years after the breakup.

Two years after calling it quits, Rachel Bilson is speaking out about her relationship with actor Bill Hader for the first time. During an episode of her Broad Ideas podcast, Bilson confessed to guest Aubrey Plaza that she had a romantic history with Hader. "We dated. I went to the f–king Golden Globes [with him]," she told Plaza, who had no idea the two were a couple.

Dating rumors between Hader and Bilson initially began in late 2019 after they were spotted on a coffee date at a local Starbucks in comedian's hometown of Tulsa, Oklahoma. A few months later, they made their red carpet debut at the 2020 Golden Globes, but by July, they had reportedly broken up. At the time, a source said Rachel was "devastated" by the split, and she seemingly confirmed this sentiment on the podcast.

The O.C. alum explained that she "could not leave [her] house" and "had nothing else to do but sit in it, deal with it and feel it" due to the coronavirus pandemic. Without explicitly calling out Hader by name, Bilson revealed that the breakup between them "hurt like a motherf—er," adding: "It was probably the hardest thing I've ever done. Harder than childbirth. … If you actually face it, you can come out of it and be like, 'OK, I did that, and I'm ready for the next thing.'"

Since their breakup, both Hader and Bilson have moved on with new people. Hader has reportedly been dating Anna Kendrick for over a year, while Bilson is now in a relationship with actor and director Zac LaRoc, who she's been seeing since October 2021. 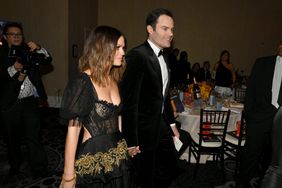