Immortalizing one of her favorite style moves.

Princess Diana was one of the most photographed people in history, giving sculptor Ian Rank-Broadley had a nearly infinite number of reference photos to pull from for his statue of the late royal which was unveiled today. While much was said about the reported tension between Prince William and Prince Harry at the statue's debut, many eagle-eyed royal fans noticed a not-so-subtle homage to Diana's signature style in the statue's outfit. Diana was known for many show-stopping outfits and scene-stealing ensembles, Rank-Broadley chose a tuxedo-pleated button-up shirt, simple A-line skirt, and bold, wide belt, an accessory that Diana turned to again and again at public events.

Kensington Palace shared that the Diana statue reflects "the final period of her life as she gained confidence in her role as an ambassador for humanitarian causes and aims to convey her character and compassion."

Rank-Broadley designed the statue to be 1.25x life-size, making the people's princess larger than life for visitors that are certain to visit the memorial. According to The Independent, Kensington Palace released a statement saying that the statue is meant to "reflect the warmth, elegance, and energy of Diana." She stands alongside three children, which are meant to represent the "universality and generational impact" of her humanitarian work.

Diana's statement-making belts became one of her trademark style moves. She cinched her outfits at casual events, like polo matches, and even at formal dinners, proving that a favorite silhouette can span any occasion.

Although they didn't comment on her style, Harry and William did mention their late mother's global impact and hoped that the statue would be a symbol of her work.

"Today, on what would have been our mother's 60th birthday, we remember her love, strength, and character — qualities that made her a force for good around the world, changing countless lives for the better," a statement from Harry and William reads. "Every day, we wish she were still with us, and our hope is that this statue will be seen forever as a symbol of her life and her legacy." 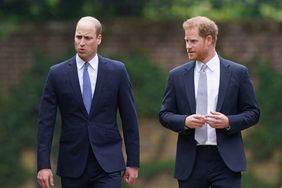