The brothers were spotted leaving the service together.

Prince Harry and Prince William reunited for the first time in more than a year at their grandfather Prince Philip's funeral, and appeared to put their differences aside for the occasion.

While the pair didn't march side-by-side during the procession behind Philip's coffin (they were separated by their cousin Peter Phillips, Princess Anne's son), they made a point to walk out together after the service on Saturday afternoon.

In video footage from outside the church, Harry was spotted chatting with Will and his sister-in-law, Kate Middleton, as they left St. George's Chapel. At one point, Kate went off to speak to Zara Tindall, giving the brothers a moment alone.

A source at Harper's Bazaar noted that Harry and the Cambridges were headed to a private wake for Philip at Windsor Castle.

Harry and Will haven't been seen together in public since the Duke of Sussex and his wife, Meghan Markle, stepped down from their royal duties last year, and their reunion comes a month after the Sussexes's bombshell interview with Oprah Winfrey.

During their chat, Harry spoke candidly about his relationship with his brother, and acknowledged rumors of a rift between them, revealing that they were keeping a healthy distance from each other for the time being. "The relationship is 'space' at the moment," he said. "And time heals all things, hopefully." 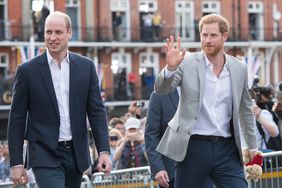