Diana made history for her trip in 1997.

Prince Harry's fifth day of his royal South African tour continued with a visit to a HALO Trust mine site outside of Dirico in Angola.

The visit, which mirrored his mother Princess Diana's own iconic walk through a minefield in Angola over 20 years ago, found the Prince remotely detonating a mine in an effort to de-mine the surrounding areas. While doing so, he met with members of the surrounding community to learn more about the local de-mining efforts, making a speech about the importance of completing such missions.

The event was immortalized in the Duke and Duchess of Sussex's official Instagram, complete with a quote from Diana's visit in 1997.

“If an international ban on mines can be secured it means, looking far ahead, that the world may be a safer place for this generation’s grandchildren,” read the caption. “The Duke is humbled to be visiting a place and a community that was so special to his mother, and to recognize her tireless mission as an advocate for all those she felt needed her voice the most, even if the issue was not universally popular.”

Princess Diana walked the same path with a similar goal in mind all those years ago, clad in the same protective gear, even meeting with landmine survivors in a bid to raise awareness and learn more about the issue.

Prince Harry has been keeping his mother in his thoughts lately, as Day 4's African trip found the royal traveling to Botswana, which he referred to his place to "get away fro it all" following Diana's passing. During his trip, he also plans to visit the same site his mother originally explored as part of his time in Angola.

Currently, Harry is traveling solo away from wife Meghan Markle and baby Archie, as the rest of his family is exploring Cape Town. As he continues to explore other locations throughout the tour, he will eventually meet back up with Meghan and Archie in Johannesburg, South Africa. It looks like Harry has at least one other stop to make before starting the loop back to meet up with the pair. 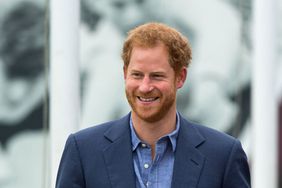 Prince Harry Opened Up About the "Panic Attacks, Severe Anxiety" He Had As a Senior Royal
It's Been 10 Years Since Rebecca Black Released "Friday," and the Internet's No Kinder to Young Girls