The new August issue of InStyle with cover girl Olivia Wilde is now on newsstands! Inside the issue, the 29-year-old works her best model poses in Louis Vuitton, Burberry Prorsum, Carolina Herrera, Chanel and more high-fashion looks curated by Style Director Melissa Rubini. Behind-the-scenes, it was all about creating, as our star called it, "a futuristic Katharine Hepburn look," with a dazzling mix of elegance and embellishment using statement coats, handbags, and dresses in an array of rich textures including calfskin, silk, crocodile, tweed, python. "The shoot was a collaboration," said makeup artist Mélanie Inglessis, who along with hairstylist Ben Skervin, created her effortless beauty looks snapped by photographer Giampaolo Sgura. Click to get a behind-the-scenes look at the cover shoot, and be sure to pick up the new InStyle, on newsstands and available for download to your tablet now.

"I use actresses and models of the past as inspiration," she said in InStyle's cover shoot video. "I've always had a thing for both Hepburns—I've had both Audrey and Katharine up on the inspiration board."

During the shoot, Wilde looked over the day's worth of photos with the team.

Wilde had numerous shoes waiting for her to step into at Milk Studios in New York City.

With trays of sunglasses and piles of handbags, there were plenty of options for our cover star. She even used a Chanel chain-link belt as a bracelet, which is featured on her cover!

The actress helped with the inspiration for the cover shoot, choosing embellished coats, dresses, and tops to create a "futuristic Katharine Hepburn" look.

Wearing a Burberry Prorsum statement coat, Wilde got a few touch-ups in-between takes by makeup artist, Mélanie Inglessis, who said "the shoot was a collaboration, and Olivia loved it."

Olivia listened to the soundtrack from Baz Luhrmann's The Great Gatsby, with songs by Jay-Z and Gotye, during the day's shoot.

Style Director Melissa Rubini was leading the charge in choosing the outfits Wilde wore, including this Louis Vuitton top and skirt.

Wilde jazzed up her manicure with Jin Soon polishes, which played well with her vintage emerald-and-diamond engagement ring from SNL funnyman, Jason Sudeikis. 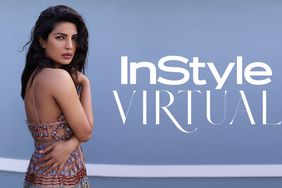 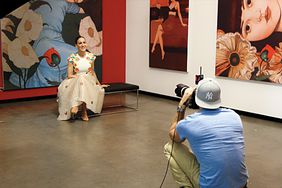