They've been together for seven years.

"The split happened at the beginning of the year," a source told People. "It's been amicable and they’ve transitioned into a great co-parenting routine. The children are the priority and the heart of the family’s relationship."

The pair started dating back in November 2011. Sudeikis proposed in late 2012.

"I met her at a finale party for SNL," Sudeikis told Stephen Colbert in 2017. "We hit it off that night. I actually came off looking a little cooler than I really am, because I had heard through the grapevine, through mutual friends who weren't exactly her best girlfriends, who would report back, 'Oh, you know, I think she's dating someone.' So, I didn't make any moves. I was just very, very busy with other things. And next thing you know, I stopped being busy, she stopped dating someone, and then it was off to the races."

Wilde told Allure that she thought the Sudekis "was so charming" when they met, but added that he "didn't even get my number."

"Over the next six months we kept running into each other," she said. "[One night], my best guy friend walked up to him and said, 'This is Olivia's number. Use it.' That was the beginning." 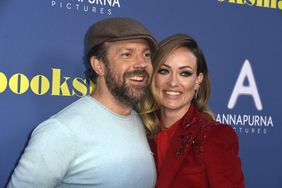