"She was singing along to almost every song."

Olivia Wilde made a surprise appearance in the audience at her boyfriend Harry Styles' tour opener in Las Vegas over the weekend — and she's hands down his biggest fan.

On Saturday, Wilde played the role of a supportive girlfriend while attending Styles's Love On Tour concert. Dressed in a powder blue pantsuit sans a shirt, the actress was spotted being escorted from backstage to her seat, and she had the best time once the show started. "She was so happy and dancing all night!" an eyewitness told E! News. "It was very cute. She was singing along to almost every song and having a good time with the people she was with."

Last month, a source told the outlet that Harry and Olivia are "very supportive of each other's careers and want to be together wherever they can," so it makes sense that the Booksmart director would attend the first show of her boyfriend's tour. The insider continued, "They click and they just want to be together. They make each other a priority no matter what. It's not hard because they are crazy about each other."

Dating rumors between Wilde and Styles began back in January after they were photographed holding hands at a wedding. Their relationship quickly turned romantic while on the set of their film Don't Worry Darling, which came as a surprise to no one. "Everyone saw it coming," a source previously told People. "During breaks, he hasn't been able to stay away and visited her trailer." Another insider added that their "chemistry was very obvious."

While neither Olivia nor Harry have confirmed their relationship, the two have been spotted together many times together over the past eight months — from Italian vacations to PDA-filled outings in Los Angeles. Just last month, they went for a walk in practically matching outfits, and during another outing, Styles sweetly put his arm around Wilde. Ah, new love. 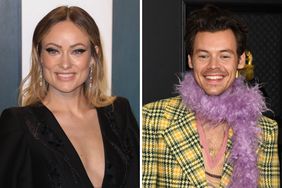