It comes as the two approach their first anniversary.

On the heels of their one-year anniversary, sources close to Olivia Wilde and Harry Styles say that the two "have a great relationship" and that they've been slowly inching towards another major move: People reports that Wilde has introduced Styles to her children, Otis and Daisy. And if that wasn't enough to cement their love story, the same sources say that Wilde's met Harry's mom.

"Harry is slowly getting to know her kids," the source explains. "Olivia is also spending time with Harry's mom."

Wilde shares her two children with her ex, Jason Sudeikis. The family get-togethers have managed to happen as Wilde wraps up a project with Brad Pitt and Margot Robbie and Syles winds down his Love On Tour World Tour.

"[They try] to see each other as much as possible. Olivia has been flying nonstop between L.A., where her kids live, to join Harry on tour," the source adds. "She always seems focused on just making it all work. She is really Harry's biggest fan."

Though the two have been quiet about their relationship, Wilde did say talk about it in her cover story for Vogue, saying that while the public may think they know what's going on, she's not about to correct what she calls a "false narrative." Instead, she's focusing on her happiness.

"It's obviously really tempting to correct a false narrative. But I think what you realize is that when you're really happy, it doesn't matter what strangers think about you," she said. "All that matters to you is what's real, and what you love, and who you love." 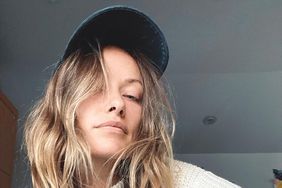