On Friday, Kardashian shared several photos of North modeling a pair of bug-eyed, reflective YR 3022 YEEZY SHDZ from dad Kanye West's fashion brand on Instagram. Like a mask, the silver shield sunnies nearly covered half of her face, and were very similar to the Balenciaga ones Kim has been recently rocking. North paired her statement sunglasses with another Kim K. signature: head-to-toe leather in all-black.

In one photo, North snapped selfies of herself while wearing a black leather tank top, matching biker shorts, and socks with no shoes.

While we'd like to assume that North was channeling her mom's look because she genuinely admires her style, there's a chance she was just trolling her. Back in March, Kim revealed that North is her biggest fashion critic.

"North is very opinionated when it comes to what I'm wearing," Kardashian told Vogue. "She'll always complain when I'm wearing too much black. I showed up at her school on Valentine's Day wearing head-to-toe pink, and she got so excited she ran over and hugged me. [Of course] she opened my coat, saw the black lining, and says 'Mom, you're still wearing black.'" 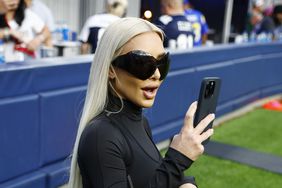