We love a curly queen.

Nicole Kidman appears to be channeling her Nine Perfect Strangers character Masha in her latest cover for Harper's Bazaar. The Oscar-winning actress looked very free-spirited on the cover of the publication's October 2021 issue.

In the cover shoot, Kidman wore her hair in its natural curly form, showing off her perfectly-shaped ringlets, which were crafted by editorial hairstylist Tamas Tuzes. On the cover, her voluminous curls were paired with a plunging printed prairie dress with a collar, buttons, and massive leg slit. Her glowy no-makeup, makeup look was perfected by celebrity and editorial makeup artist Holly Silius who paired Kidman's flawless complexion with a simple eye and nude lips.

In the interview, Kidman revealed that her innate ability to dig so deep with characters is something that stems for her childhood.

"My mother says that I was intense," she told the publication. "I've always felt things really deeply."

She continued that her intensity is also a result of her artistry and full commitment to it. "I suppose the artist spirit, a lot of times, is saying, 'I don't care what it's gonna cost me as a human being, because my thrust is deeply artistic,'" she said, before adding that she would come home with bruises after filming Big Little Lies. "That's probably just a massive push-pull in any person who's a painter, a writer, you know?" 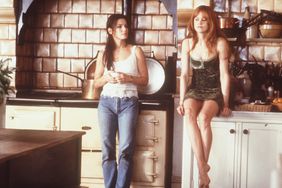