And the coordinating top.

As awards season draws closer and everyone has their eyes on who will take home the trophies at the Academy Awards this year, fans and critics alike are eyeing Nicole Kidman to take home the gold. Before that can happen, however, she sat down with Vanity Fair to talk about transforming into TV icon Lucille Ball, which basically set the blueprint for actors to take control and become multi-hyphenate moguls.

This year's Hollywood Issue sees Kidman wearing one of the most-talked-about looks from Fashion Week: look 16 from Miu Miu's Summer 2022 collection. Hailey Bieber models a few looks from that season's release for the brand's new campaign and Emily Ratajkowski wore a look from the collection to the CFDA Awards.

For the stylized shot, which was lensed by Maurizio Cattelan and Pierpaolo Ferrari, Kidman opts for a full Miu Miu look, from the pointy loafers and knee-high socks to the tiny micro miniskirt and its matching top, which both feature frayed hems and trompe l'oeil details. Touches make the bra top look like it has a waistband and both pieces look like they have pocket linings peeking out.

Can We Please Stop Complaining About Actors Being Cast as People They Aren't Identical To?

Kidman spoke about how people underestimated Ball, but that she and Sorkin knew better — and wanted to make sure audiences saw it, too. Kidman wanted to ensure that behind the laughs and the slapstick, everyone knew Lucy was the first woman to lead a major production studio.

"Aaron Sorkin wrote her as the smartest person in the room, because she was," she said of her role. "A lot of times, particularly as a woman, if you're smart, there's a lot of apology."

It's just the latest role that has Kidman playing a cultural touchstone: in the past, she's embodied Virginia Woolf, Gretchen Carlson, and Princess Grace of Monaco. Of course, she's no stranger to becoming a film icon herself, with roles as Satine in Moulin Rouge and Nine Perfect Strangers's Masha becoming major moments long after those projects wrapped. 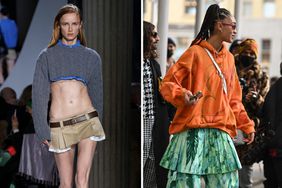