Sixteen years have passed since Nicole Kidman and Keith Urban tied the knot in 2006, but for the couple, it hardly feels that long ago. On Saturday, Kidman celebrated their marriage's sweet 16 with a rare throwback photo from their wedding day on Instagram, along with a sweet message for her husband.

"Sweet XVI," Nicole wrote in the caption of a photo that featured the couple lighting candles together at the altar during their church ceremony in Sydney. She added, "Remember this like it was yesterday. Forever." In the snapshot, Kidman wore a stunning one-shoulder white gown with a long veil, while Urban chose a classic black suit.

Urban also celebrated the special milestone with a more recent photo of the pair on his grid, writing to Kidman: "HAPPY SWEET 16 BABY xxxxx."

Kidman and Urban first met in January 2005 at the G'Day USA gala, and quickly fell in love. Three years later, they welcomed their first child together, Sunday Rose, 13, followed by their second daughter, Faith Margaret, 11. Earlier this year, Nicole gushed about her relationship with Keith during an interview with CBS Mornings. "I met him later in life and it's been the best thing that's ever happened to me," she said. The Big Little Lies actress was previously married to Tom Cruise, and it wasn't until four years after their divorce that she met Urban at age 38. "That man is the best thing that's ever happened to me." 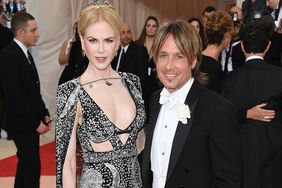