Over the weekend, Kobe Bryant was honored and posthumously inducted into the Naismith Memorial Basketball Hall of Fame. And his family received the honor on his behalf at the 2020 awards, which had been postponed from August 2020 due to COVID-19.

Kobe's wife Vanessa and their daughter Natalia were presented with the basketball legend's 2020 Hall of Fame jacket and ring during one of the events. Vanessa placed the jacket on her daughter and led the crowd in chanting Kobe's name. Natalia was later photographed wearing the jacket on the carpet while holding up her dad's award with her mom by her side.

Vanessa Bryant and Her Daughter Got New Tattoos Together

Vanessa posted a touching image from the exhibit that was displayed in Kobe's honor. "Love you always," she captioned the post, which showed her posing with a large photographer of her late husband.

She also posted photos of their youngest daughters Bianka and Capri taking in the exhibit.

At Saturday's ceremony, Vanessa gave a touching speech accepting Kobe's honor and induction on his behalf, recalling that Kobe was excited to receive this award back when he got word of the honor prior to his death in January 2020. "I wish my husband was here to accept this incredible award," she said. "He and Gigi deserve to be here to witness this. Gigi would be so proud to watch her daddy get enshrined in the Basketball Hall of Fame."

Natalia was absent from Saturday's ceremony, but for good reason. Vanessa took to Instagram with a sweet selfie of herself with Natalia to explain that the teen missed the ceremony for another right of passage: prom. She added that in high school, she had to miss prom because Kobe had a playoff game the same night of their prom.

"Natalia almost missed her senior prom last night," she captioned the post. "When we heard Natalia's prom night and Kobe's Hall of Fame night were on the same night, I looked at Natalia and said, 'well if it's any consolation, daddy kept me from going to my prom, so it's only right that he tried to keep you from going to yours.' 😃 Of course we laughed because even in heaven, he's still trying to make moves and keep the boys away. Natalia's experienced so much loss, I couldn't let her miss out on her once in a lifetime opportunity to go to her senior prom. Thank you for flying out to accept daddy's Hall of Fame jacket and fly home the next morning." 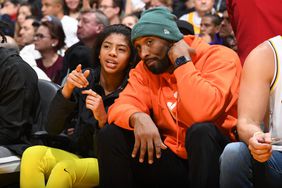