Badass Women celebrates women who show up, speak up, and get things done. As someone who has proved she’s not to be messed with, it’s only fitting that Speaker of the House Nancy Pelosi lead our class of 2020.

What makes a badass? Purpose. For me, purpose is helping the one in five children in poverty who goes to sleep hungry. Having five children of my own, I want them to know their opportunities and the love and care they receive. At least I hope they would see it that way. [laughs] I consider myself a lioness in that regard — you come near my cubs, you’re in trouble.

Being a mom, in a way, has prepared me for my time in politics because it is about time management, diplomacy, logistics, being a quartermaster and chauffeur. If only I had a driver who cooked! [laughs] When we brought our baby Alexandra home from the hospital, our oldest child was turning 6 that week. So, five kids in six years. When they are finally in school, you think, “Now I can take on the world.” People ask me all the time how I do it, and I think part of it is being Italian-American. I have so much energy. And the other part is chocolate — very, very dark chocolate.

Finding a balance is important too. I tell the members, “ ‘Recreate’ and ‘re-create’ are the same word.” When you recreate you re-create your energy; you renew yourself. Work hard, do your constituent work, keep the home fires burning, and relax, because you must be renewed for when you come back for the fight.

My best badass advice is to be you. Be confident in what you have to offer. It’s nice if you want to have role models, but be yourself. That has an integrity about it, an authenticity about it. That is what is necessary. Know your power, know what you can do. Take inventory. Count it all. Count being a mom, a housewife — all of those other experiences that you bring to bear. I was basically a shy person, believe it or not, so I didn’t really like the spotlight, but I loved the issues.

Also, nothing is more wholesome for the political process or anything else you can name — military, academia, business — than the increased participation of women. If I ruled the world, I would say the priority is the education of women and girls. You can’t just say girls because many women still need it. It makes the biggest difference. The education of women for their family, for their society, for the economy, for themselves. It’s the most important thing so we can have more badasses.

I thought maybe I would stay here [in office] for 10 years. Then my colleagues asked me to run for leadership. One advantage I had is that I had no ambition to do that, so I was deeply engrossed in my appropriations work and my intelligence work. That grounding served me well as a leader, because I know my stuff.

Looking ahead, I’m so proud of all our [Democratic] candidates for president, and I’m very excited about the prospect of having a new, fresh voice in the White House. I hope we can increase the numbers. Sixty percent of our caucus are people of color, women, or LGBTQ. One hundred and six women were elected to the Congress last year — that was the biggest number ever, and the first time we were over 100.

I want to make a difference on climate issues; I want to make a difference on children’s issues. The Affordable Care Act is really a culmination, for me, of so many of those things. That was my biggest accomplishment and probably still is. I don’t see impeaching a president as an accomplishment. I prayed that it would never be necessary. I never wanted to believe that a president of the United States would violate the Constitution, as this president has. That was something you want to think is not possible. But when it is, then you have no choice.

I think the reason I can stay calm in my role as Speaker is because I’m not ambitious. I’m not trying to get anything out of it — all I’m trying to do is deal with it. At a certain point your satisfaction is seeing other people succeed at whatever all of this is. Anyway, take the slings and arrows and then let the real heroes emerge. I certainly hope that makes me a badass. 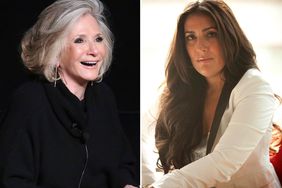 How Executives Sheila Nevins and Nina L. Diaz Put MTV Back on the Map