The basement of Sasha Velour’s three-story Prospect Heights, Brooklyn brownstone is an emporium of over-the-top glamourwear: racks of sparkly, beaded ball gowns in rich blues, reds, greens, golds; wigs in almost as many hues; sequined high-heel booties; ornate headpieces; feather boas; and a mirror that, at the flip of a switch, is illuminated by fluorescent ring lights — one of several features throughout her new home planned with photo ops in mind.

“I’ve always taken pride that I can live a really luxurious, opulent, decadent life on almost no money,” she says. But Velour, who, for the uninitiated, won the ninth season of the eagerly watched RuPaul’s Drag Race, recently got a major cash infusion.

A small fraction came from the TV show itself, which she says paid approximately $500 per episode while costing her $4,000 out of her own pocket for the elaborate costumes, a key feature of the competition. (They paid off when she nabbed the $100,000 prize.) But the publicity from Drag Race, which has won an increasingly frenzied fanbase, lit her other ventures on fire. “About 10 months after filming was the first time I saw serious paychecks come in — when I got to tour as someone who had just been on TV,” she says. Before Drag Race, she was booking eight to 10 shows in a good month; after, she had offers to perform daily. “I got to experience a shift, being able to do drag in that pay bracket, at that level of frequency.”

It’s a far cry from her first gig, which took two weeks to prep for and earned her $100. “Drag was not a money-earning profession for me prior to Drag Race, and that’s something I try to be really honest about,” Velour says, so she got jobs at a gym sign-in desk, in a make-your-own pottery studio, teaching English, and as a designer for New Yorker cover editor Françoise Mouly’s children’s comic-book company (“one of the most influential jobs of my life”).

Most of the show money has gone back into her business, House of Velour, which counts projects like her Brooklyn drag show Nightgowns, a hardcover art magazine, merch, and short films. But some she’s reserved for the HGTV-like decor revamp she recently gave “Casa Velour,” the $5,000-a-month (and much more expensive-looking) rental where she lives with her partner, in life and business, Johnny. Whatever spending money Velour has, she says she's been putting it into the extensive home reno, though a partnership with Article Furniture helped. One room they barely touched was the very-1970s retro kitchen, where they added a gallery wall, including Velour all dressed up for her her bar mitzvah. “My first big drag moment.”

Armchairs and lamp by Article Furniture.

Below, Velour opens up her books.

On bookkeeping at age 8… “I grew up in a house that was very serious about money. My mom was in charge of the money for the house. My dad didn’t touch it. She, once a month, would assemble all the receipts and paperwork, and it was almost this performative ritual of balancing accounts. I hated it — she would make me sit next to her and study what she was doing from age 8. They basically didn’t use credit cards when I was growing up, so it was really about only spending money that you have.”

On her first-ever drag show… “My first gig in New York, I think I made $100 for a whole night, and I had been prepping for two weeks. Maybe things will change, but I also think it was my first time ever performing in drag. I don’t think I deserved more than 20 bucks. The typical pay for a starting drag queen in New York is $20-40 a night.”

On buying her own costumes for Drag Race… “I think I spent about $4,000 on the costumes, out of pocket. That’s why on TV, I’m not wearing anything custom, whereas that’s a huge part of what I do now because I have money from the gigs I can invest back in it. I found a big part of the transition to bigger paychecks is completely changing the way I think about what all of this is going to cost me.”

On how fame changed her spending… “I went a little crazy at first. The freedom and excitement to spend and invest in the artform itself was the most exciting. I went a little too far with custom costumes and headpieces and jewelry. Ultimately it’s less about my personal spending — everyone who knows me knows I don’t have a personal life. Everything I spend money on is work-related because I just love putting on a show.”

On the gilded challenges of sudden success… “Managing a business was the hardest transition. I thought of it as, like, ‘Okay, money is coming in, and I spend it on whatever I want.’ But I [had to] work on not just Sasha Velour as a celebrity but House of Velour as a group that’s publishing a magazine, giving jobs to queer people, basically running a costume studio. That’s a lot to manage, and I definitely do not have a background in being a small business owner.”

On House of Velour’s biggest money-maker… “Merchandise. That has been the single most continually earning aspect of the business. It’s is a huge way that people can make money from Drag Race. And then paid appearances in drag can bring in large amounts in a single day, which is really helpful.”

On her first makeup purchase… “My makeup exploration was a Ben Nye theatrical makeup kit in like Caucasian Male 1. It’s a classic theater makeup brand. I got it to do community theater in central Illinois where I grew up, and it’s, like, a required purchase. I was maybe 10. It had foundation and a little lip wheel, with a little brush, powder, and a stippling thing to create a fake beard that I used all the time in my early drag king days. I was always interested in shifting my gender. I would play alone in my room and make myself into a cowboy and then a beautiful princess. I was always imagining what kind of extreme adult I could morph into.”

On the most transformative makeup buy… “I use an Inglot gel liner with a really fine angle brush to do my cat eye, and I love it ‘cause I can I basically obscure my entire actual eye shape and build a new eye on top of that. My lips, I still use Ben Nye theatrical red glitter. I wear terrible makeup all the time, and the way I make my skin still look nice is by slathering on moisturizer like Joan Crawford before I go to bed and after I shower.”

On her most extravagant purchases… “I don’t quite spend as much as brides, but I do basically have a wedding dress, like, once a month, so extravagant fashion purchases within reason. I try to keep everything under $1,000 per look. And I think I spent $2,000 on an alpaca wool men’s suit from Acne that is so deeply impractical, and I wear it all the time. It’s my drag king suit.”

On joining accounts as a couple… “We had separate accounts before either of us had money, and that worked great. The risk of joining when we were both scraping by every month seemed too high. Part of joining our accounts as a couple was deciding to go into business together. I would definitely not recommend it for most people, but we’re figuring out how to make it work, just having clear communication about all purchases.”

On her best career anti-advice… “I feel like I’ve mostly ignored the career advice I’ve been given. In terms of this career of drag, the possibilities are being written now, so there’s no wisdom in following the paths that have been set before and a special need to break away from that.” 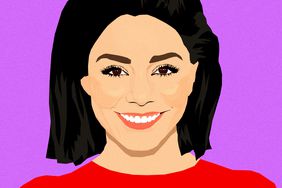 Vanessa Hudgens on Getting Her Card Declined at Cartier