Back in 2018, three weeks into filming for the first season of FX's groundbreaking ballroom series Pose, star Mj Rodriguez had an epiphany. "I started realizing how the show was not only about entertainment," she recalls. "It was also extremely educational about our lives [as trans people] and how we chose to move through the world."

After years spent navigating Hollywood as a trans woman, Rodriguez was shocked to finally land on a script that clearly understood not only how the world perceived members of her community, but the resiliency that allowed these women to continually fight to carve a space for themselves. "That was just so crazy at the time," she adds.

When Pose premiered in summer 2018, the Ryan Murphy and Steven Canals-created series quickly made headlines for centering what is still the largest cast of trans actors to ever appear on a scripted television show. Set in New York, the series starts near the height of the AIDS crisis in 1987 and focuses on the many LGBTQ+ people of color whose lives were irreparably affected by it. But while many narratives about that time period hone in on the endless cycle of death and devastation that define it, Pose expertly balances the dark with the light by spotlighting the sparkling world of ballroom, perhaps the only place where those same people could experience joy.

Rodriguez plays Blanca, the show's beating heart, who receives a positive HIV diagnosis in the pilot and promptly dedicates herself to establishing a legacy she'll feel proud leaving behind. In season one, she begins this mission by fleeing the coop of her "house mother" to start her own "House of Evangelista," which she promises will be different thanks to her personal desire to be the loving, supportive mother figure she never really had. By season three, the show's last, she has raised several of her own "children," all of which are now out fulfilling their wildest dreams. Blanca, meanwhile, concludes the series by pursuing her own: studying to become a nurse.

"It gave me this crash course into the regular life of a person who is trans," Rodriguez says about those early scripts. Though the show revolves around the aforementioned balls, Rodriguez praises the vibrancy with which Pose painted its characters outside those confines. "It was just the regular life of a human being trying to strive and fit into a world that didn't consider them worthy of fitting in," she remembers. "That had a lot of weight to it and it was very much pressed upon me."

Speaking from Los Angeles, where she had been admiring the "cute little view" outside her window, the New Jersey-born Rodriguez is in a predictably reflective mood when we touch base. In just two weeks time, Pose would air its final episode ever, and expectedly, the star found herself unable to stop thinking about her show's rapidly approaching conclusion.

We naturally stumble towards a conversation about Blanca's ultimate trajectory, which only seems fitting when discussing a character who has talked about her "legacy" from the very beginning. "I think Blanca has definitely fulfilled all of her goals and I think she's received the fruits of her labor," Rodriguez tells me. She points to several of her character's individual accomplishments as examples — getting her own apartment, opening a nail salon, enrolling in nursing school — but seems most proud of the family Blanca was able to build under the House of Evangelista. "I think it's creating a great story for any mother, or any person who is a guardian, to challenge their kid to dream the impossible and fight and know that you have a family behind you," she expands. "I think that was the main key."

Yet, to hear her tell it, Blanca's most important storyline didn't come until this very season, when her character started dating Christopher, a successful doctor played by the Tony and Emmy-nominated Jeremy Pope. "I think Jeremy and I really did a good job expressing how love should be when it comes to men dating trans women and defending us when we need defending," she says. While Pose has often been praised for humanizing the trans community for those who exist outside of it, Rodriguez wanted this specific storyline to be a lifeline for trans people themselves. "I feel like a lot of trans girls need to know that they can be loved," she explains. "They don't need to go searching for it because sometimes it's waiting right there in front of you, and it will come to you when it needs to come to you."

She goes to a specific moment from this season's first episode when Christopher sits down with Blanca to admit that he loves her before asking if she'll "take the next step" by accompanying him to meet his parents. "These are things that people need to watch on television screens to see that it's obtainable and that these are the normal things that happen within any relationship," she says. "I'm not even going to lie. I wanted [to portray the relationship] only because I wanted the world to see how people can love a trans person with there being no barriers or restraints."

Rodriguez has always valued Pose's ability to tell healing, inspiring stories like these about the trans community. Which is why, perhaps, her feelings about Hollywood's larger response to the series are mixed. To date, the critically acclaimed FX show has been nominated for eleven Emmys — including one for Outstanding Drama Series and several for costumes, makeup, and hairstyling. This, alone, would be impressive, but as many have pointed out, it's interesting that the only two acting nominations for a show featuring unprecedented transgender representation have been for the show's male lead, Billy Porter.

When asked about this, Rodriguez is sure to begin her answer by bestowing praise on her "amazing costar" Porter, whose win in 2019, for the show's first season, she credits as "a door-opening opportunity for all of the women in Pose down the line." Still, she thinks the industry could do better.

"I feel like I'm finally comfortable enough to say this, because I've been thinking it for years," she begins. "There's a piece of the industry that does not see us as who we identify as and I think that's one of the reasons why they probably wouldn't give those [nomination] spaces to women like us. I think people need to respect and see us as who we are. Then we can move forward." Though she never expresses it explicitly, it's easy to see that Rodriguez is alluding to Hollywood's continued reluctance to fully accept that trans women are women — even as they purport to appreciate a show like Pose, which asserts this reality as a given.

Besides, she can already see a shift. "I think with what's been happening in the industry recently, and in the world generally, a lot of change is happening. It's happening slowly, but also weirdly quickly," she offers. "It may not make sense, but I'm seeing it through my eyes and it's actually happening. Who knows, [an Emmy nomination] could possibly happen this year."

But even if it doesn't — Emmys voting begins on June 17, with nominations announced a month later, on July 13 — Rodriguez knows that being on the show at all has already been a life-changing gift, for herself and for the culture at large. Speaking about her experience filming these last seven episodes, she giddily exclaims, "I got the opportunity to be number one on the call sheet! Never has a trans woman ever been allotted that opportunity."

And coincidentally, after years of celebrating her involvement with a show that let her put her trans identity at the forefront, Rodriguez is now excited to move forward with new projects where that identity is a mere sidenote, if it's a factor at all. Next, she's poised to pivot from drama to comedy in an upcoming AppleTV+ series created by the Emmy-winning duo behind Amazon's Forever, Alan Yang and Matt Hubbard. Currently titled Loot, the series stars Maya Rudolph (who Rodriguez praises as "The Queen of Laughter") as Molly, a woman forced to adjust to a new life when her husband leaves her with nothing but $87 billion. Rodriguez plays Sofia, "the hardworking executive director of the nonprofit funded by her absentee billionaire boss," according to Variety.

"I think it's wonderful that, finally, the world gets to see a trans woman be in a different position of power — actually knowing what she needs to do, how she needs to do it, and how to handle her business," Rodriguez gushes about her next project. "Also, realize that she's not even considered a trans woman in the script. She's just a character. We don't know that she's trans; it just so happens that I am trans. I could just simply be the character that people see on the television screen."

Rodriguez has a few other projects in the pipeline, too, though she's still sworn to secrecy for many of them. She seems most excited about a film she's attached to, telling me, "I'm diving into the movie space. That's the main thing I wanted to focus on." But she's also thrilled to now have more time to record original music. Though her acting has taken precedence over these past few years, the multi-talented performer can't wait to return to her "number one dream" of singing, and is even releasing her first single (under the name Michaela Jaé) on June 4. "I'm trying to chase it right now and I'm not letting down," she says.

Before we end our call, I tell Rodriguez how much I and other queer people of color have appreciated the beautifully nuanced and complex work she's put into her portrayal of Blanca. "You can't be making me cry on this phone call," she responds after a brief pause, her voice switching over into an audiblequiver. "You got me over here tearing up a little bit and I can't."

"You just really said that and sometimes a girl needs an uplift like that, because sometimes it's hard to even believe that this is all happening," she continues.

As we sign off, now deep into our emotional heart-to-heart, I remind her that if she needs a quick pick-me-up, she can always look back outside her window to admire her cute little view. "I was just doing that," she says, now with a slight laugh. It feels like an appropriate end — not only to our conversation, but to Pose as well. Just as Rodriguez's career will live long beyond the groundbreaking series that made the actress a household name, I can't help but imagine Blanca Evangelista's story continuing beyond the show's upcoming finale. After a long journey, it's comforting to imagine her sitting down, enjoying a view of the endless horizon ahead of her.

The series finale of Pose airs June 6 on FX. Mj Rodriguez's new single, "Something to Say," will be released under the name Michaela Jaé on June 4. 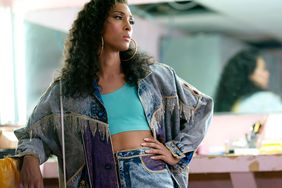