Miley Cyrus is making the most of her time in New York City with what feels like limitless camera-ready outfits, from a high-slit, animal-print slip dress to a black silk micro-mini. Her most recent look? A culmination of all the hottest trends currently filling up our Instagram feeds and TikTok For You pages.

On Monday, the singer appeared on Late Night With Seth Meyers in a peach-colored, silk midi Alexander McQueen dress that had a built-in tulle bustier that peeked out from under a layer of draping fabric. A dainty bow adorned the sweetheart neckline that attached to spaghetti straps. She paired the feminine smock with beige strappy stilettos, a short diamond necklace, and gold hoop earrings. Miley's signature platinum hair was styled into a deeply-parted shag cut with a brunette-dyed underlay.

During the interview, the pop star detailed the scary moment when her plane was struck by lightning in South America. "It was really scary," she told Meyers. "I was in my mom's lap — because I was pretty sure it didn't matter about the seat belts at this point — crying because I was scared."

"We had to do this emergency landing and we were in the middle of South America, and I was actually on my way to a show, which by that point had been flooded and canceled," she explained, referring to the Lollapalooza festival in Asuncionico, Paraguay.

Earlier in the day, Miley attended and performed at the NBCUniversal Upfronts at Radio City Music Hall. For the occasion, she wore a red slouchy, asymmetric Dior dress with one off-the-shoulder sleeve and a high leg slit. A silver chain belt and matching crimson heels accompanied the look.

She also announced that she would once again be hosting a New Year's Eve special at the end of this year. She shared the news on her Instagram alongside a gallery of snaps of the singer on stage writing, "Celebrating the announcement of #MileysNewYearsEveParty 2023! I'm partnering with Lorne Michaels AGAIN to make this party possible! Thank you bringing in 2022 with us & starting this year off right! CELEBRATING TOGETHER! 🎉🍾💃" 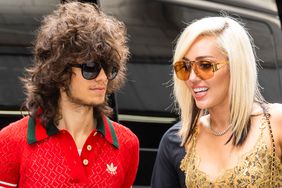