The promos for this week's upcoming controversial episode of Saturday Night Live have arrived, and if they're any indication of how this weekend's show will go, it's going to be ... interesting.

The "Party In the U.S.A." singer is still rocking her signature mullet that she's been sporting for most of this year, but now it's really a party in the back because it's long enough to pull into pigtails. Whatever you'd call it, it's definitely reminiscent of the '80s, which seems to be her inspiration these days.

During the teaser, Musk says, "Hi, I'm Elon Musk and I'm hosting SNL this week with musical guest, Miley Cyrus. And I'm a wildcard, so there's no telling what I might do." Cyrus pipes in adding, "Same here, rules, no thing." SNL cast mate Cecily Strong jumps in and says "This is also the Mother's Day show, so your moms are gonna be here." To which Cyrus responds, "Forget what I said," before Musk adds, "Fine, we'll be good-ish."

In the second teaser, Cyrus asks what Musk has been up to, and he responds "I just did a successful rocket launch this week." Strong adds, "Wow, well I did my laundry" before saying "Actually, no I didn't."

Cyrus has been spotted in New York City this week as she gears up for Saturday's performance. She was seen rocking the mullet-pigtail look with an '80s-inspired, one-shoulder floral dress and a different punk-rock look where the pigtails were tied up into buns.

Well, we can't stop thinking about this upcoming SNL episode and what Cyrus will be wearing on stage. 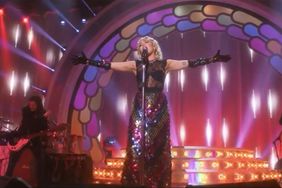