She first mentioned her sobriety six months ago.

Earlier this year, Miley Cyrus revealed to Vanity Fair that she decided to be sober while recovering from vocal cord surgery back in November 2019. In a new interview on Apple Music's New Music Daily Radio With Zane Lowe, however, Cyrus explained that several things caused her to "fall off" of sobriety recently and that now, she's been sober for two weeks.

One of the factors, she said, is her age. Cyrus turned 28 today and she mentioned that the age of 27 is significant to her and many other people. Plus, she noted that the specific conditions that she found herself in because of the novel coronavirus pandemic also affected her sobriety.

"Well, I, like a lot of people, being completely honest, during the pandemic fell off and felt really a lot of [...] and I would never sit here and go, 'I've been fucking sober.' I didn't and I fell off and I realized that I now am back on sobriety, two weeks sober, and I feel like I really accepted that time," she explained. "One of the things I've used is, 'Don't get furious, get curious.' So don't be mad at yourself, but ask yourself, 'What happened?'"

"To me, it was a fuck up because I'm not a moderation person, and I don't think that everyone has to be fucking sober. I think everyone has to do what is best for them," she continued. "I don't have a problem with drinking. I have a problem with the decisions I make once I go past that level of [...] Even into, I've just been wanting to wake up 100%, 100% of the time."

She added that she's confident in her ability to maintain her sobriety again. She's disciplined and determined, two traits that help her.

She elaborated about the 27 Club, as well. Jimi Hendrix, Janis Joplin, and Jim Morrison all passed away at age 27 and Cyrus said that she's aware of the lore and mythos of being a musician at age 27. She said that being an artist, growing, and maturing have all affected her.

"That actually really made me want to get sober was because we've lost so many icons at 27. It's a very pivotal time. You go into that next chapter or this is it for you," she said. "I just feel that some of the artists that almost couldn't handle their own power and their own energy and their own force. It's an energy. I, no matter what, was born with that." 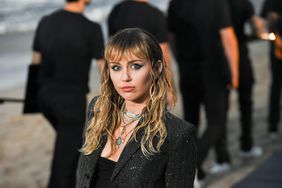