Update 08/14/20: Miley Cyrus has confirmed her breakup with Cody Simpson. In an Instagram Live, the singer said, "Today it came out that me and my boyfriend have broken up."

"For right now, two halves can’t make a whole, and we’re individually just working on ourselves, becoming the people that we want to be. Like everybody else at this age, we’re just deciding who we want to be with our lives, what we want to do with our lives," she continued. "And so, don’t make it some drama story if next week we hang out and we’re getting pizza. We’ve been friends for 10 years, and we’re going to continue to be friends. Just don’t make it something that it is not."

After less than a year — but what a year — Miley Cyrus and Cody Simpson have reportedly split. Page Six reports that the two have gone their separate ways, though neither Cyrus nor Simpson have confirmed the breakup.

According to Entertainment Tonight, fans saw it coming. Cyrus seemingly alluded to the breakup on Instagram during the reveal of her brand-new single, "Midnight Sky." Cyrus captioned a photo, "Forever and ever no more. The #MidnightSky is the road I’m taking … head up high in the clouds."

The source added that the two fell hard and fast and that they bonded over their passion for music.

"What began as close friends supporting one another during a rough time, blossomed into more," the source noted. "Their relationship was unexpected and became meaningful very quickly, and she couldn't be happier. They are both very passionate about their music and it’s something that has bonded them."

The two have not appeared on each others' social media accounts since April. Simpson was a guest on Cyrus's Instagram Live talk show, Bright Minded, on April 3. Simpson shared a black-and-white photo of himself and Cyrus on April 14. 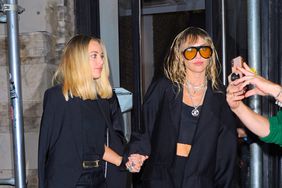