They were together for less than a year.

After her divorce from Liam Hemsworth and a relationship with Kaitlynn Carter, Miley Cyrus seemed to settle down with Cody Simpson, though the two would only end up staying together for less than a year. Simpson opened up about his time with Cyrus during an appearance on Australia's 60 Minutes, Page Six reports, saying that it was a "phase" and that he looks back at the relationship as a learning experience.

Simpson explained that he and Cyrus had been friends first and that moving into more romantic territory seemed to be the right move at the time. The two first teased tabloids back in October 2019, eventually posting photos and videos of each other on social media and being spotted all over Los Angeles together.

"It was just one of those phases, I guess. You go through [it] and you learn a lot from it," he said "I'd known her for a long time at that point. We went from kind of being good friends to just having a lot of the same friends, to being together for a while."

Cyrus confirmed that she and Simpson separated in August 2020. In an Instagram Live, she said, "Today it came out that me and my boyfriend have broken up. For right now, two halves can't make a whole, and we're individually just working on ourselves, becoming the people that we want to be. Like everybody else at this age, we're just deciding who we want to be with our lives, what we want to do with our lives."

Post-breakup, the two wiped their social media feeds, completely erasing every photo and mention of each other, and turned their focus to other projects. Simpson started to prep for the Tokyo Olympics, where he hopes to compete in swimming, and Cyrus went on to promote her 2020 album, Plastic Hearts. 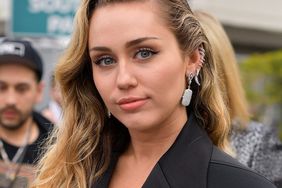