In Jason Wu on January 20th

The First Lady made her entrance at the Neighborhood Ball on Inauguration night wearing a custom chiffon gown by then 26-year-old Jason Wu. "[The dress is] about hope. It's about newness," he told CNN. "It's all a little dreamlike, and we're making history, and I wanted to really reflect that." Wu handmade the organza flowers that decorated the single-shoulder design.

In Tracy Feith on January 21st

For her inaugural open house, Mrs. Obama chose a wisteria-print dress from Tracy Feith. "She likes things that are feminine but somewhat adventurous," the designer told Grazia Daily.

In Jason Wu on February 22nd

"This is where the magic happens," Mrs. Obama said, introducing a tour of the White House kitchen. One could argue that the real slight of hand happened in Jason Wu's studio, where the First Lady's violet sheath-and its hundreds of decorative knots-was created. "I believe in beautifully made clothes that are timeless, not trendy," the designer has said.

In Kai Milla on February 25th

In Peter Soronen on February 22nd

It may have been Oscar night in Hollywood, but Mrs. Obama commanded all attention at the D.C. Governors' Dinner wearing Peter Soronen's "Twilight" gown. "I don't remember in my lifetime seeing a First Lady look like that," the designer told Mary Tomer, author of Mrs. O: The Face of Fashion Democracy. "She looked glamorous!" Mrs. Obama topped off the strapless gown with a multi-strand necklace by Tom Binns.

Setting off a spate of copycat shopping, the First Lady paired a J. Crew beaded cardigan with a jacquard skirt from the brand for a London meeting with Sarah Brown, the wife of the British Prime Minister. "Mrs. Obama is a woman of style," the J. Crew Creative Director Jenna Lyons told Mandi Norwood, author of Michelle Style. "But she's also warm and approachable. People look to her for validation, so Mrs. Obama will give people the courage to step out of their current style."

In Azzedine Alaia on April 3rd

For the NATO summit in Baden-Baden, Germany, Mrs. Obama wore a '50s-inspired knit Azzedine Alaia dress with a tulle underlay. "She wore it well," the designer told Women's Wear Daily. "I couldn't hope for better. I'm sure women will follow her style-it's simple and elegant." The First Lady also owns a collection of Tunisian-born Alaia's belts.

In Michael Kors on May 9

For the White House Correspondents' Dinner, the First Lady wore an eye-popping fuchsia sheath by Michael Kors with a matching pearl-and-crystal necklace from St. Erasmus. Joked the President at the event, "No matter which party you belong to we can all agree that Michelle has the right to bare arms."

In Thakoon on November 4th

As the honorary chair of President's Committee on the Arts and the Humanities, the First Lady gave a speech wearing a silver-belted tweed suit by Thakoon. "I think that what she is doing is great for fashion and I love that she's shifting gears from celebrity culture," the designer told Mary Tomer, author of Mrs. O: The Face of Fashion Democracy. "It's great that the person whose fashion we're celebrating is a working mother."

In Talbots on November 4th

Mrs. Obama chose a budget-conscious-and beautiful- Talbots sheath for a classical music presentation in the East Room of the White House. She accessorized the double-face wool dress with bronze kitten heels and a stack of gold bangles. 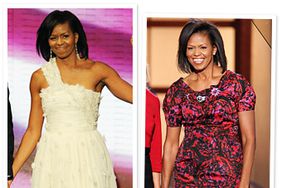 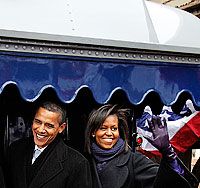