The woman responsible for some of history's most iconic outfits shares her tricks of the trade.

Michelle Obama's name is most definitely on the short list of living fashion icons. Any time the former First Lady leaves her house (or, you know, hops on a publicized Zoom call), we immediately feel an urge to find out more about her outfit. Who made that coat? Where'd she get that necklace? And how does she manage to make average, everyday items, from pairs of sneakers to classic hoop earrings, look so darn good?

The answer to that last question — and the person who always knows the answer to the first two — is Meredith Koop. The stylist has been dressing Michelle for over a decade, after meeting her by chance while working at a high-end boutique.

"I wasn't someone who really had the confidence, capacity, or the knowledge to say, 'Oh, I want a career in fashion, what are the steps to get there?'" Koop tells InStyle, reflecting on how she got her start. "When I moved to Chicago, I was really just looking to 'adult.' I ended up working [at Ikram] through a series of coincidences; I saw an ad and said, 'Oh, I can do that.' At a boutique, it depends, but you're building relationships. It's sort of like styling-lite, in a way, because you're working with clients. They come in, you're putting together outfits, adding accessories, and doing alterations. Those are skills that I learned there that I think prepared me for the next step."

At one point, Koop's boss needed help prepping looks for Michelle. "When you're the First Lady, there are so many events and things to keep organized. You have to make sure everything's steamed, and perfect, ready to go, so that she doesn't have to think about clothing," she explains. It was through some hard work — and, according to Koop, literal "luck" — that she eventually landed herself the gig as Michelle's sole stylist in 2010.

"And the rest is history, as they say."

While Michelle's schedule might not be as jam-packed as it used to be when Barack Obama was the sitting president, dressing someone in the public eye whose every move is scrutinized sounds incredibly nerve-wracking. Koop doesn't deny this as a fact, but says she's learned to adjust over the years, actively working to tune out online critics and social media trolls, who always have something to say.

"I think with anything, especially now, if you get caught up in the day-to-day, it's like a disease," she tells us, adding that well-known first ladies from the past, such as Jackie Kennedy, had the luxury of living without Instagram and Twitter, and could be more selective with how they were seen and photographed. "Every day, you're intaking thousands of new opinions, outlooks, and perspectives, and I don't really know that we're built to do that."

Instead of stressing about what the public might say about a certain outfit choice, Koop focuses on the task at hand and considers what's actually important. "I had to distance myself from that culture a bit in order to keep myself sane and trust my instincts, my judgment, and my taste, so I'm not being influenced by the fact that user5969 thinks you suck. What's really important is making sure that my client is happy, and that the fashion is not a distraction from the overall goal or message from her, her office, and of the overall administration."

Of course, Michelle Obama's outfit is often a message in itself. Like many public figures, she makes specific choices that speak volumes. Fans will recall how the "Vote" necklace from her virtual DNC speech went viral last year — a reaction that pleasantly surprised Koop herself.

"I had this vision for that, finding a necklace like that, and I was familiar with ByChari's work, so I was like, 'Oh, okay, this is perfect.' But you don't really know until the moment happens. I was really concerned about the camera, and how close or far it would be, and whether you would actually be able to read the necklace. There are always elements that I can't necessarily control — even though I'm a control freak, and I would love to control everything."

Despite the fact that Koop has spent so many years as Michelle's stylist, it's safe to say that we've yet to see her style an outfit that feels stale or uninspired. That's because the pro is open to evolving, and in recent years, says she's moved toward a "cleaner aesthetic, with jewelry that speaks, but doesn't scream." For instance, if Michelle is wearing a big belt, like she did at President Joe Biden's inauguration, she makes sure it's a piece that complements the overall design without being distracting or overbearing. And, if that's the big statement piece, she'll keep the rest of Michelle's accessories classic and simple.

Koop is also famous for having Michelle recycle and re-wear certain items or full outfits, which is not a rare fashion move — clothes are meant to be worn more than once! — but it always manages to make headlines, which confounds the stylist.

"Somewhere along the way, because of the mass consumption and capitalism, we have slipped into thinking that the norm is always having your picture taken in something new," she says, admitting that she's also been "infected" by that same thought process. "I have kind of trained myself, in a way, to understand that it's honestly not that important to have something new. If you like something, you should wear it more than once, and I can't think of why that would be abnormal."

"There's so much clothing in the world; it's already out there waiting to be re-worn."

Unsurprisingly, the stylist enjoys keeping sustainability in mind when it comes to fashion. Koops admittedly could spend a full day browsing secondhand items on Etsy and The Real Real, which is a fashion trick she recommends everyone try.

"If you find a designer that you like and it's out of your price range, it's cool to try and find something secondhand. I do that all the time. I'm always looking for stuff that I don't want to spend thousands of dollars on, and if somebody wants to sell me their stuff that they wore, I can get a better price on it and it's close to being new. I love vintage T-shirts and vintage jeans. It does take a bit more work sometimes to find the right fit, but it's fun. And it makes sense. There's so much clothing in the world; it's already out there waiting to be re-worn."

While Koop has no real predictions about how we'll dress post-pandemic, she's hopeful people will continue to rethink fashion and how they consume it. She believes the industry as a whole might "continue down the road of discovery, looking for new things, and maybe think a little bit more outside of the box," since so many old systems — from Fashion Week to mass production — were no longer working.

Koop is thinking outside the box in terms of her career, too. While she isn't giving up her day job, she plans to use her creativity in different ways, taking up writing as well as working on a series.

"A lot of my career has been around storytelling with clothing as a medium, and I really enjoyed that process, but I'm ready to sort of tell a different story in a different medium," she says. Keeping lots under wraps, she says the series is "fashion-related, but it's not 100% fashion. It's more about the intersection of fashion, culture, and politics. It's accessible; you don't have to know everything about fashion to engage with this show — it's for everybody." And that's the case with good style, too. You can see why she and Michelle Obama made such a great match. 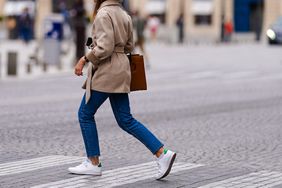