Meghan Markle and Prince Harry revealed that they are expecting their second child on Sunday (Feb. 14), and as it turns out the date of the announcement holds a special significance. And it's not just because it's Valentine's Day.

Instead, it's the same date Princess Diana shared that she was pregnant with Harry, who also happened to be her second child. "It was exactly 37 years ago that Princess Diana shared with the world that she was pregnant with Prince Harry," tweeted royal reporter Omid Scobie alongside a black and white newspaper clipping of the late princess on the cover of The Daily Express in 1984.

The article was fittingly titled, "Valentine's Day joy for Charles and Diana."

Earlier today, a spokesperson for Meghan and Harry confirmed that the couple was expanding their family. "We can confirm that Archie is going to be a big brother," the statement read. "The Duke and Duchess of Sussex are overjoyed to be expecting their second child." In the announcement photo, Meghan and Harry gazed at each other lovingly, while Meghan cradled her stomach and laid her head in Harry's lap.

This isn't the first time Meghan and Harry have honored Diana when it comes to their children. Back in 2019, the pair paid tribute to Archie's late grandmother in the royal's birth announcement, noting that Diana's siblings were among the first to learn of the new baby's arrival.

"The Queen, The Duke of Edinburgh, The Prince of Wales, The Duchess of Cornwall, The Duke and Duchess of Cambridge, Lady Jane Fellowes, Lady Sarah McCorquodale and Earl Spencer have been informed and are delighted with the news," they said.

Clearly, the couple plans to keep Diana's memory alive for Archie and his soon-to-be sibling. 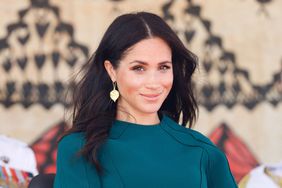