Meghan Markle and Prince Harry are taking New York City by storm during their trip for Nelson Mandela Day and Harry's special address at the United Nations. Meghan is also using the visit to catch up with friends. On Monday, the Duchess of Sussex grabbed lunch in Soho with activist — and neighbor back in California — Gloria Steinem.

For the outing, Meghan beat the NYC heat in a cool yet sophisticated look that included knee-length navy shorts and a breezy white button-down shirt, which she wore with the sleeves rolled up to her elbows. A rust brown trifecta of suede pumps, a beaded clutch, and matching belt completed the look. Her hair was parted down the middle and slicked into a low ponytail, and she accessorized with gold bangles and matching rings, one of which promotes women's empowerment.

She and Steinem exited the establishment hand-in-hand. For her part, Gloria chose an all-black pant and shirt set complete with a gold and bronze belt with shell beading. After the Supreme Court ruling that overturned Roe V. Wade, Meghan and Gloria spoke out together about the importance women's reproductive rights in a Vogue feature. Gloria also touched on the pair's friendship.

"Meghan, I owe this friendship to you," said Steinem. "Because I did not realize that in California, where I was sheltering on a friend's ranch, we were neighbors. Or at least what is called neighbors in California, which means you're, what, a half-hour away."

Meghan Markle Discussed Motherhood and Her Miscarriage After the "Roe v. Wade" Decision

Yesterday, Prince Harry spoke at the U.N. Headquarters in honor of Mandela, a friend of his late mother, Princess Diana. During the speech, Harry gave his wife and mother the sweetest shoutout when he spoke about the country of Africa, which has held a special place in his heart since his first visit. "For most of my life, it has been my lifeline, a place where I found peace and healing time and time again," he said. "It's where I felt closest to my mother and sought solace after she died, and where I knew I had found a soulmate in my wife."

During a trip to Botswana early on in their relationship, the two bonded while camping out "under the stars." "She came and joined me for five days out there, which was absolutely fantastic," Harry recalled. "So then we were really by ourselves, which was crucial to me to make sure that we had a chance to know each other." 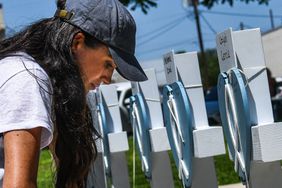