She says the backlash she received from online bullies was "almost unsurvivable."

Even before the royal exit, Meghan Markle was often the target of negative tabloid reports, scrutinizing her every move. There's no question that the backlash took its toll on the royal, and in honor of World Mental Health Day, she's opening up about how the online bullying began to affect her emotional well-being.

During an appearance on the Teenager Therapy podcast alongside her husband, Prince Harry, Meghan revealed that the constant critiques were "almost unsurvivable," and something she never could have prepared for before entering the royal family. When speaking about how people are spending more time on the internet to stay connected amid the coronavirus pandemic, the duchess pointed out the negatives of always having access to our devices. "Yes, it's a great way to connect but it also ends up being a place where there is a lot of disconnection," she said, including her experience as an example. "I can speak personally, too. I am told that in 2019 I was the most trolled person in the entire world — male or female."

She reminded the panelists that for, the most part, she was out of the public eye during that time. "Now eight months of that, I wasn't even visible. I was on maternity leave or with a baby," Meghan explained. "But what was able to just be manufactured and churned out, it's almost unsurvivable. That's so big, you can't even think of what that feels like. Because I don't care if you're 15 or 25, if people are saying things about you that aren't true, what that does to your mental and emotional health is so damaging."

The duchess continued, "So from my standpoint and for the work that we do is that from my personal experience and be able to talk to people and understand that even though our experience is unique to us and obviously can seem very different from what people can experience from day to day, it's still a human experience and that's universal."

Like everyone, Meghan admitted that she knows what it's like to be isolated or have her feelings hurt. "We are all figuring it out," she added, revealing that she likes to cope by journaling.

The conversation then turned to Meghan's heartbreaking response when journalist Tom Bradby asked her how she was doing during the Sussexes 2019 royal tour in South Africa.

"I didn't realize that my answer would receive such an interest from around the world," she explained of the vulnerable moment. "Because I said, 'Well thanks, people haven't really asked me if I'm OK.' I didn't think about that answer. I just answered honestly because I was in a moment of vulnerability, because I was tired, because there was no presentation. It was just, here I am. I'm a mom with a four-and-a-half month old baby and we are tired."

"But I think it speaks to the fact that the reason that it resonated with people is because everyone wants to be asked if they're OK," she said. "So today I would say, I am doing really well. Thank you for asking." 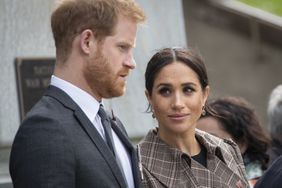