The duchess wasted no time decorating.

It's only been several weeks since Meghan Markle and Prince Harry settled into their new residence in Santa Barbara, but the couple has wasted no time in making it feel like home.

During a Zoom call with her charity Smart Works to celebrate the one-year anniversary of their workwear capsule collection, the Smart Set, the duchess gave fans a glimpse at the decor inside their house, revealing an interesting design detail. As pointed out by Harper's Bazaar, Meghan hosted the virtual meeting in what appears to be the Sussexes's home office in front of a stone fireplace with a piece of artwork hanging above: a cover of sheet music for "I Love You, California," the official state song.

The vintage print features a grizzly bear (the state animal) hugging a cut-out of California in his arms, while the song itself was written in 1913 by Francis Beatty Silverwood — a native Angeleno.

This isn't the first time fans received a sneak peek at the couple's new interior. Last month, Meghan and Harry appeared in their first joint video call since they moved out of Tyler Perry's mansion in Los Angeles, and into their forever home. While speaking with a group of young leaders from the Queen's Commonwealth Trust, two windows and and a large plant were positioned behind the pair.

After living in LA for five months, Meghan and Harry opted for more anonymity in Montecito, Calif, with digs that are reportedly around 14,563 square-feet and cost $14.7 million. "They have settled into the quiet privacy of their community since their arrival and hope that this will be respected for their neighbors, as well as for them as a family," a source previously told People. 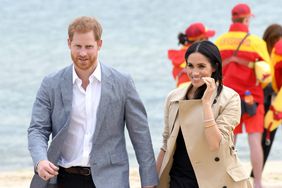 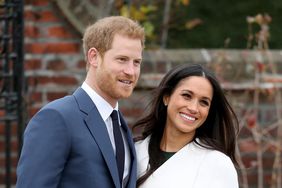