Royal rules are a thing of the past.

Among the explosive revelations from Meghan Markle and Prince Harry's interview with Oprah Sunday night, I was struck by something a bit more abstract. Sitting in two matching wicker chairs, placed strategically in front of a backdrop of greenery, the couple looked different. Maybe it was the sunny L.A. light, as opposed to London's more dreary skies, or the visible relaxation of Meghan's shoulders, or perhaps it was the fact that I was subconsciously aware that the interview marked a turning point for the duchess — a new, American era.

New York Times fashion critic Vanessa Friedman pinned the difference on Meghan's outfit, which she described as "more of a high glamour, celebrity kind of thing" in contrast to her former royal digs. The 39-year-old, who is expecting a baby girl with Prince Harry this spring, wore a $4,700 Armani dress, which was belted above her stomach and accessorized with a crystal pendant necklace. Princess Diana's Cartier tennis bracelet glittered on her wrist. The silhouette, colorway, and accessories are not something unlike what we would have expected from Meghan were she still on royal duties. But the visual impact of this luxurious dress, with its silken sheen and playful metallic sash, was subtle, but clear: Meghan is no longer anyone's submissive; she's in control.

Since her tenure in the international spotlight, Meghan has appeared before us in the perfectly coiffed image of a royal, down to the fussy "rules" of royal dress: Always wear nude tights; do not wear dark nail polish; when the occasion calls for it, wear one of those quirky hats that British people can't seem to get enough of.

In the Oprah interview, Meghan detailed her royal life of isolation, deprivation, and obligatory "no comment" responses to each and every media query. Trapped behind the walls of Buckingham Palace with not a drop of company, Meghan was told that if she followed directions, she'd be offered protection by one of the most powerful institutions in the world. And though she did not speak of a palace dress code or anything of the sort, it's not a leap to assume that her wardrobe — the same wardrobe that spurred the Meghan Markle effect, and thus the ability to influence the fashion industry itself — was monitored to some extent. At the very least, Meghan was likely aware of the expectations of appearances that were and were not acceptable for a member of the royal family.

Given the record-breaking numbers that tuned into the interview in both the U.S. and Britain, it's clear that interest in duchess has not plateaued; if anything, it appears that Meghan has become as popular as ever the world over. Whether she chooses to go full fashion darling with her very own Michelle Obama-post-White-House Balenciaga boots moment, or return to her polished, Suits-era penchant for monochromatic, fuss-free Working Girl looks, we can expect that Meghan knows that all eyes will be on her — and to use that fact to her advantage.

In her role as the Duchess of Sussex, Markle was the very picture of fashion diplomacy, a template for future politicians, professional philanthropists, and the public-facing companions in those people's orbits. Her carefully curated looks, which she understood to be under constant surveillance (and scrutiny) due to her high-profile position, symbolized the wide net of her progressive beliefs, speaking for her when she could no longer put metaphorical pen to paper via her shuttered blog, the Tig. A pair of jeans by Outland Denim, a company that employs survivors of sex trafficking in Cambodia, demonstrated her support for women's empowerment and agency that expands far beyond her adopted country's borders; A collection of Everlane jumpsuits, totes, and shoes, displayed her support for a company whose mission statement includes commitments to both sustainability and ethical production; her rewearing of those same garments belied her efforts to shift the conversation away from the "single wear" model that has contributed to the fashion industry's massive waste problem. And then, of course, there was Markle's display of respect for the people whose countries she visited on royal duties, demonstrated by her selection of pieces made by local designers and artisans.

It's difficult to imagine that Meghan, noted progressive ideologue, will drop this pointedly symbolic dress simply because she is no longer acting on behalf of Her Majesty the Queen. Ever a fan of "hidden meaning" fashion, Markle's Armani dress is also believed to be a message of sorts: According to Town & Country, the lotus flower embroidery symbolizes rebirth and a fresh start.

In a just-revealed photo from the couple's February maternity shoot, Meghan wears an off-the-shoulder palm-printed dress by New York-based label La Ligne, which retails for $395. The olive green boho dress, with its smocked silk bodice and tiered skirt, is the most-L.A. look we've seen on the duchess in some time, perhaps suggesting that when she isn't exposing the messy underbelly of the British monarchy for an audience of millions, she'll embrace a more relaxed look, something that can be worn with bare feet on the grass. Something a tad more affordable than off-the-rack Armani, but still positions her in a relatable light.

Four years have passed since Meghan and Harry first announced their coupledom. In that time, Meghan left her Hollywood past behind her, and instead embraced a life of philanthropy, motherhood, and occasionally spilling the tea on a centuries-old institution. Her next chapter, like the two behind her, is likely to bring with it its own set of joys and challenges — and, if we're lucky, a catwalk's worth fashion inspo. 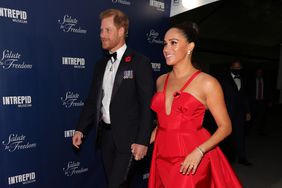