Over the weekend, Meghan Markle gave a moving speech to the graduating class of 2020. Her heartfelt message included a powerful message: "George Floyd's life mattered." According to Newsweek, however, Markle couldn't have offered the same sentiment if she and her husband, Prince Harry, didn't step away from their roles within the royal family.

Royal protocol states that the members of the royal family aren't allowed to do anything that could be seen as "politicizing the monarchy." Dickie Arbiter, Queen Elizabeth II's former press secretary, explains that Meghan's speech "would have been pretty impossible" to get past all the approval from Buckingham Palace.

Meghan mentioned that she had hesitated to bring up the subject of Black Lives Matter during her speech, but decided that "the only wrong thing to say is to say nothing." She didn't say nothing. In the end, she mentioned George Floyd, Breonna Taylor, Philando Castile, and Tamir Rice by name.

"What's happened in the states is an absolute tragedy and it should never have happened but unfortunately it did happen. Had Meghan and Harry still been in the U.K. and working members of the royal family that speech couldn't have happened," Arbiter explained. "It's highly politicized because of the very nature of what it is. It is a social issue for the United States and it is not for a head of state to voice an opinion, whether the queen or the president of France or whoever."

Omid Scobie, Harper's Bazaar's royal editor, stated that "remaining vocally nonpartisan" is part of being a royal. However, even with that precedent, Scobie says that now is not the moment to remain neutral. He explained that protests are happening right on the royals' doorsteps at Windsor Castle, so it's nearly impossible for the royals to ignore it. Scobie adds that several European royals have stepped forward and made it known that they support the Black Lives Matter movement.

"While I appreciate the importance of members of the British Royal Family remaining apolitical and not delving into the political issues of other countries, we need to see the issue of anti-Black racism for what it is — a global human rights crisis, which, like in the U.S., has been at the root of so many societal issues in the U.K. and across the Commonwealth," he said. "Members of the Royal Family have said little about the issue of racism over the years, but silence right now is not an option. Up and down the country, including right outside Windsor Castle, we have seen protesters demonstrating against police brutality and racism, and we have heard powerful messages from European royals and the Duchess of Sussex that have been heard by millions. It's so important that anyone with a platform, particularly those who regularly use their voices to amplify humanitarian and charitable issues, gets on it and speaks up." 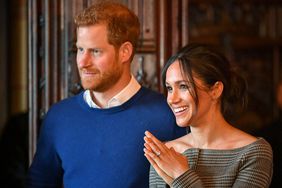