She wore the throwback shirt on a poster for Machine Gun Kelly's new movie Good Mourning.

On Thursday, Fox's fiancé Machine Gun Kelly (Colson Baker) dropped the poster for his new movie Good Mourning on Instagram, and on the promo ad, Megan made an appearance in an outfit that was seemingly straight out of Clueless. In the image, the film's cast posed together on top of MGK's head, and for her part, Megan wore a tie-dye heart cropped T-shirt similar to the baby tee Brittany Murphy's character Tai made iconic in the cult '90s film after receiving a makeover from Cher and Dion.

Megan's version showed off her toned midsection, and rather than a miniskirt, she opted for a pair of light-wash jeans. For the role, Megan dyed her long, dark hair pink, and styled it straight with a middle part.

The film — which marks Kelly's directorial debut along with Mod Sun and stars Pete Davidson, Whitney Cummings, Dove Cameron, Becky G, and other famous names — is a stoner comedy that follows movie star London Ransom (MGK) who must choose between his one true love and a starring role in a major motion film. "We're just happy to be bringing our vision to life," Mod Sun and MGK told Deadline back in August about the movie, which they also co-wrote together. "We're humbled by the trust we have from our cast members and crew." 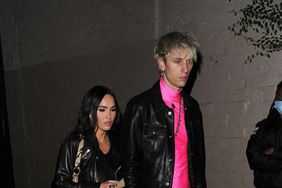 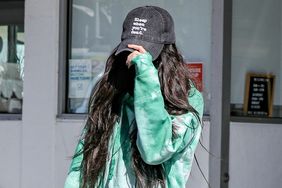