It's "for ritual purposes only."

It's one thing to joke about blood and even wear jewelry made with blood, but Megan Fox clarified that it's no joke when it comes to her and her fiancé, Machine Gun Kelly (real name Colson Baker). The couple has spoken about the role that blood plays in their relationship, but for the first time, Fox clarified that the two do, indeed, engage in ritual bloodplay. It's not exactly like a scene out of Jennifer's Body, however, as Fox went on to say that it's just a few drops.

Fox adds that she's "controlled" when it comes to their rituals, which also involve tarot cards and other metaphysical practices, but that MGK isn't always as careful — in theory, at least.

"I'm much more controlled. I read tarot cards and I'm into astrology and I'm doing all these metaphysical practices and meditations. And I do rituals on new moons and full moons, and all these things. And so, when I do it, it's a passage or it is used for a reason. And it is controlled where it's like, 'Let's shed a few drops of blood and each drink it,'" she said. "He's much more haphazard and hectic and chaotic, where he's willing to just cut his chest open with broken glass and be like, 'Take my soul.'"

But has he ever actually done that? Fox didn't give an explicit answer.

"It doesn't not happen," she clarified. "Let me tell you. Maybe not exactly like that, but a version of that has happened many times."

When MGK shared his proposal with the world, his Instagram caption mentioned blood. 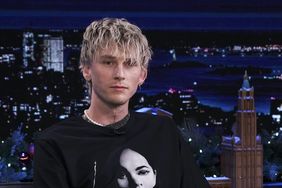 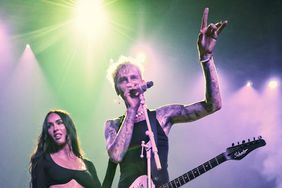