It’s funny having famous hair. It’s funny to have famous anything, for that matter. Fame has a half-life. It’s sort of like radioactivity—long after the original offense, you still feel the effects. The Internet has complicated the situation, but I’ve found that I can avoid news of myself by employing almost exactly the same skill set I use for not looking in mirrors.

It’s a type of precision-controlled aversion well worth mastering, even if a bad-hair day does slip in, which is bound to happen. But so what? It’s nice being oblivious to the general skinny on yourself. Why bother with it? A general skinny has a life of its own, which is pretty much immune to management anyway.

I’m not exactly expert at ignoring myself, though, because news about me occasionally does waft in. For instance, I am aware that I once had a famous haircut. I know this mostly because I still see it on people in New York. Occasionally, it suits the person sporting it but mainly not, because it was the ’90s after all, and its time has passed.

I also know this because Sally Hershberger, the stylist who put it on my head to begin with, told me so. Apparently, there were years and years when people would come to her with crumpled magazine pages and expect to leave her salon with the same cut as mine. She obliged as much as she could, but in some impossible cases—namely, for super-straight or very curly hair—she would have to deny the request. You can’t please everybody.

When I think about my hair, I think about Sally because she is, for the most part, responsible for it to this day. She’s cut, trimmed, razored, chopped, and slashed it for a million years now. For a while there was so much product in my hair that if you set the microwave on high and stuck my head in it for 30 seconds, I’d come out a muffin. Happily, I don’t really have a lot of complaints about my hair. It takes direction well, meaning it mostly does what it’s coaxed into doing. I like that it isn’t terribly weather-dependent, and on a good day it tends to help my face out.

My children, however, do have complaints. When my son was about 6, I came home from a photo shoot for which Sally had given me a blow-dry. He was getting over the flu. I looked in on him sleeping and touched his flushed little face with the back of my hand. He opened his eyes, took one look at me, and burst into tears. He mooshed my hair around and felt better, I guess, because he went directly back to sleep. My daughter also finds disorienting anything approaching organized hair on me. She’s 12 now, but when she too was about 6, I had my hair flat-ironed for some reason, and I kissed her good night.

“Say that to me with messy hair,” she whispered.

Anyway. I got the famous haircut mostly by accident—in French Kiss I played a character stranded in Paris without luggage, money, or a place to live, so it was a stretch to think she had much opportunity to shampoo. Sally had to figure out hair that looked bad but sort of good all at once. While we were working it out during the camera test, she punctuated some remark she was making by pulling the curling iron way over her head. A sizable chunk of my hair had singed off and was still wrapped around the iron. I noticed the flame first. For a second Sally looked like the Statue of Liberty: frozen, torch aloft, and a little green. You can’t really blame her for the iron’s overheating because of the different voltages in Europe. She was left to scissor away until we got what we got.

As I said, I’ve been pretty good at ignoring my public self, but not great. The Internet makes it hard. You can be minding your own business for years and years, as I have, and suddenly come across a ghastly picture of yourself eating a sandwich you would otherwise never have remembered. Or you find any number of bad-hair days immortalized as if they’re interesting. Happily for celebrities, though, the Internet has democratized humiliation—it’s the end of privacy for everybody now, so ha!!

Those of us who were famous in the ’90s had time to ramp up and get used to being publicly humiliated. When a wire service picked something up, it was the early version of going viral. I remember having a chat on camera with a reporter who wanted to talk about my hair because he said he thought it looked marvelous. A nice-enough observation but hard to turn into an actual conversation no matter how good your sense of humor is, particularly if you’re tired. Anyway, I guess I sighed and didn’t play along, and my perceived snottiness was picked up by all the wire services. That’s the least of it, really, but you know what I mean. The Internet has a way of siphoning off context, which is partly why it succeeds so well in being a shame machine.

I was only kidding about being happy that social media is now an equal-opportunity shamer. It’s very sad, particularly for the kids. At times I’ve let the haters put my head down and my bad-hair day in a hat. I hope my kids don’t waste their time feeling like that. As I’ve said, my daughter is 12, right on the cusp of those potentially red-faced teenage years. My little girl, whose hair is beyond reproach in my opinion, could find herself mocked by some preteen hater. I just can’t stand it. I worry it’s only going to get worse given the terrible example our president currently sets for the kids on Twitter.

It breaks my heart when he’s insulting. It really does. After all, I feel a fellowship with him because we both know what it feels like to have famous hair. But since he doesn't seem remotely interested in stopping it, I’m going to arm my daughter with something my girlfriend learned from her mom when she was 12. She said a person should assume that half the people she meets in life won’t like her for the precise reasons the other half will, and she might as well stop trying to please everybody because, given that fact, it’s mathematically impossible anyway.

It’s terrific advice and worth sharing with everybody—not just the kids. Sally apparently knew it back in the days she was setting my hair on fire. You can’t please everybody. And for the record, I think it’s excellent that math proves it. There’s something to be said for ignoring the haters, even if ignoring them doesn’t make them go away. It’s probably impossible to ignore the president, but I’m going to try. I might apply that aversion technique I was talking about earlier to his Twitter account, but it’s not foolproof, so things might still waft in.

October Cover Star Julianne Moore Gives Us a Lesson In Character: “The Worst Thing You Can Do to Someone Is Not See Them”

Meanwhile, I forgot to point out something important, something having famous hair in the ’90s would teach anybody. I speak only with the authority of a person who can still see her haircut from 20 years ago on a stranger, that is to say none, but life is more fun when you’re less interested in what other people think of you. It’s the end of privacy for everybody, and times are fraught, but I’m grateful for having learned this. It’s sort of the chocolate on the pillow of the whole shebang.

Meg Ryan is an actress, a producer, and a director.

For more stories like this, pick up the October issue of InStyle, available on newsstands, on Amazon, and for digital download Sept. 15. 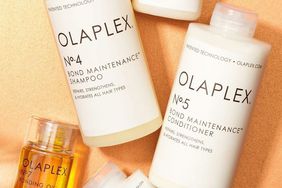