The This Is Us star on saying goodbye to Rebecca Pearson, heading out on tour, and the L.A. moms club that keeps her going.

Not many people have managed to gracefully move from the world of over-the-top, Technicolor music videos and Y2K fame into a firm position as one of the most beloved actors, ever. But Mandy Moore did it, treading the path from Carson Daly's microphone to movie theaters and TV sets, giving life to some of pop culture's most memorable characters along the way. Moore talks about jumping from singing to acting like it's easy, something she's done because it was just part of her life as someone who didn't have the pressure of topping the Billboard charts, who managed to let her music be for herself and have her acting roles support her expression in a whole different way. It's why she's returning to music: not because she has to, but because she wants to.

"I'm totally fine with a specific part of the younger generation only recognizing my work from a television show, that's totally understandable," she says, though she still has vivid memories of 1515 Broadway and standing over fans in Times Square. "I recognize if that was not a part of your childhood, you probably think someone has seven heads when they're talking about MTV, TRL, and what happened during those days, it's just like an entirely different world."

In the two-plus decades since "Candy" and its meme-ready music video (it spent 61 days on the countdown), Moore has set herself apart from her fellow pop princesses by adding to her résumé without losing herself. Mandy, the actress, has managed to win (and break) hearts with roles in A Walk to Remember and The Princess Diaries, earned indie cred with an iconic turn to the dark side in Saved, voiced a Disney Princess in Tangled (singing and all), and earned Golden Globe and Emmy nominations for her role as Rebecca Pearson in This Is Us. You know, the show that managed to make just about the entire nation cry every single week for six seasons and comes to an end on May 24.

In the series's penultimate episode, viewers joined Rebecca as she passed, masterfully told through a train analogy that saw the show's beloved matriarch visiting important people in her life, including a heavenly reunion with her first husband and true love, Jack, played by Milo Ventimiglia. The show's finale, which creator Dan Fogelman described as a "day in the life" of the Pearson family set against Rebecca's funeral and one last chance for viewers to be with the Big Three, will undoubtedly bring on even more than the usual waterworks. Moore is understandably proud of the series and the character, saying that she set out to be a part of something she'd want to watch — always circling back to create things that mean something to Mandy, the person.

"It feels very much in line with where I am in my own life and the kinds of entertainment that I enjoy," she says of the show. "Being able to put something positive and hopeful and feeling-ful out into the world is very special."

All the while, Mandy, the mom, welcomed a son, Gus (short for August Harrison), in February 2021 with husband Taylor Goldsmith. And now, Mandy, the singer, is bringing something else into the world: a new album, In Real Life. It's her first since 2020's Silver Landings and the second time she's collaborated with Goldsmith (fun fact: Moore enlisted Hilary Duff's husband, Matthew Koma, for some help this time around, too).

"I kind of feel like that's been the bulk of my career and life is just juggling between multiple different hats and just staying present and focused on what I'm doing at any given moment," Moore says of going from the This Is Us set every day to embarking on a tour. "So, I'm excited to have the cathartic emotional opportunity to process my feelings about the end of this very seminal chapter of my life and being able to celebrate this chapter and this new music and going on the road with my family, all of that is very special."

Gus will join his parents on tour ("He can't be away from mom and dad for that long," Moore says. "He's coming on the road."), which starts on June 10 in Georgia and finishes up in July with an appearance at the legendary Newport Folk Festival in Rhode Island after stops all over North America. It's Moore's first tour in more than a decade after a planned outing in 2020 was canceled (we don't have to tell you why).

That final venue is telling for anyone wondering where Moore's music has gone since 1999's So Real and Coverage, her album of unexpected covers (ranging from Carole King and Blondie to Elton John) from 2003.

"Because I never achieved the kind of success that most of my other contemporaries did, it allowed me to keep making music, but make it on my own terms," she explains, adding that her unique approach to her recording career allowed for more experimentation, which developed into the folk-inflected sound of In Real Life. "It's not like I had the expectation of record labels and fans kind of beating down my door asking what's next or trying to follow up some crazy number-one single. It allowed me to discover artists that I loved and new records, and those influenced and inspired me in many ways."

She's not shy about where her singing has — and hasn't — taken her thus far. "Music was never the most important side of my career, it never found the same success; [and] the acting was a little bit more of my day job," she says. "It allowed me to just keep making music on my own terms and writing my own music and making it for myself."

Making things for herself even includes a new take on "Candy," which Moore assures fans will be on the setlist. "It's not my favorite, but it holds up. It's so much fun to play that song live," she says. "The band has a new arrangement for it. And so it's like it breathes new life into it."

Gus comes back into the conversation (and elicits a joyous lilt that's distinct from Moore's reflections on Saved and Tangled) when Moore notes that life as a first-time mother has introduced her to a group of mom friends in L.A., which happens to include Duff and fellow new moms Ashley Tisdale and Meghan Trainor. The group's jealousy-inducing Instagram posts have shown everything from picnics to baby music classes and drum circles. Moore gushes when she speaks about having a support system — which just happens to sound like one of the most exclusive clubs, ever. As Moore puts Rebecca and the Pearsons behind her, she's clinging on to the maternal instincts she had to portray on the show with a little help from her friends.

"Hilary is the coolest and she is a super-mom. She and Matt have become really close friends with my husband and I. But they have a kid who's six weeks younger than Gus. And so, we had babies at the same time and she, being the super-mom that she is, formed a cool mom club," Moore says. "Somehow, I got invited into it and it's the best. I've made so many wonderful friends. We all just gathered earlier this week and had dinner and we have baby classes together and it's incredible. It's so much fun. I'm very, very grateful to have those resources and just incredible women to be able to lean on. We're all kind of going through this chapter of our lives together."

There's no doubt these cool moms will have to answer questions about The Princess Diaries, Lizzie McGuire, and High School Musical eventually. Moore's not worried about that. Those things have already proven to be important cultural touchstones and mean something to fans that goes beyond just liking a movie. Crafting something that lasts in minds and hearts is what really matters, Moore insists, whether it's a family, a film, or an album.

"I feel like maybe there's something to be said of what attributes to success or longevity and the fact that I've been doing this since I was 15," Moore says. "23 years of having a career is never something I imagined when I first started out and was lucky enough to have those opportunities. So, it's pretty wild to still be standing here today, talking about getting to do what I love." 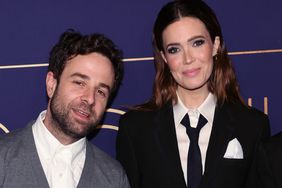