As any This Is Us fan knows, Mandy Moore is quite the chameleon. In every episode of the NBC drama, the 33-year-old star transforms through the decades to play the Pearson family matriarch, Rebecca, seamlessly pulling off scenes that span over forty years.

But still, the actress admits it was a little jarring the first time she saw herself aged to play the 66-year-old version of Rebecca. “I was like, ‘Wow, is this what I’ll look like in thirty years?!’” Moore told InStyle when we caught up with her at FFANY's annual footwear charity gala in N.Y.C., QVC Presents "FFANY "Shoes On Sale" (airing Oct. 12 at 6 p.m. ET on QVC). “Then, I was like, it’s not so bad. I hope I look this good when I’m 66! Rebecca takes pretty good care of herself.”

Though the pressure to stay fresh-faced in Hollywood is still omnipresent, Moore says her stint on This is Us has only helped her embrace the aging process. “I’m not scared of getting older,” she says. “I’m actually looking forward to it now.”

It makes sense then that her beauty routine is similarly uncomplicated. “It’s boring, but my beauty secret is that I haven’t led a crazy, wild life. I don’t go out a ton and I get enough sleep,” she says. “The one thing that I do swear by is moisturizing. I always use an organic coconut oil all over when I get out of the shower. I also use it to take off all of my makeup when I get home from the set, no matter how tired I am.”

RELATED VIDEO: Mandy Moore & The Cast of 'This Is Us' Play a Birthday Connections Game

When it comes to the costumes on the show, Moore says her preferences skew a little bit younger. “I really like all of Rebecca’s clothes from the ‘70s,” she says. “She has all of these cool, vintage boho dresses that I love to wear because I grew up in the ‘80s and ‘90s and have no real point of reference from that decade."

One thing she can relate to? Rebecca’s onstage outfits. In last week’s episode, Rebecca, who had dreams of becoming a singer, pulled out her lucky performance dress for her daughter Kate to wear to the school talent show. Moore says that filming the scene reminded her of some of the looks that she herself wore as an up-and-coming pop star in the ‘90s, when she opened for boy bands like *NSYNC and Backstreet Boys on tour. “When I was starting out, it was all about those bejeweled white tank tops and flared, colored leather pants,” she says, laughing. “I think I have PTSD from those pants.”

Fashion regrets aside, Moore looks back fondly on her pop star days, often posting epic #TBTs like this one (below) with Justin Timberlake. “I was a 15-year-old girl freaking out inside when I opened for *NSYNC,” she recalls. “Who didn’t have a crush on Justin at the time?

So the question remains: Was she team *NSYNC or BSB? “I was both!” she says. “When I was touring with the Backstreet Boys, I was team Backstreet and with *NSYNC, I was obviously team *NSYNC.”

Any ‘90s fans still dreaming for a reunion tour better not hold their breath though. “I haven’t really seen any of the guys since then,” she says. “It would be funny though. I don’t know if they’d even remember me from that time in my life.” 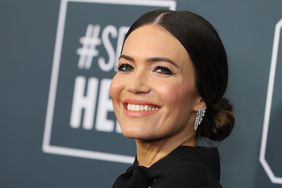