Just waiting on the news that she'll be starring in it, too.

When it comes to telling the story of Madonna, nobody does it better than Madonna. According to Variety, the multi-hyphenate, multi-talented superstar will be helming her biopic that's set to chronicle her life and career as well as helping to write it alongside Oscar winner Diablo Cody. Unlike recent musical films Bohemian Rhapsody and Rocketman, which had their subjects act as creative consultants and executive producers, Madonna will be directly involved in the movie, which still doesn't have a working title, even though Madonna has been teasing the project on social media.

"I want to convey the incredible journey that life has taken me on as an artist, a musician, a dancer — a human being, trying to make her way in this world," Madonna said in a statement. "The focus of this film will always be music. Music has kept me going and art has kept me alive. There are so many untold and inspiring stories and who better to tell it than me. It's essential to share the roller coaster ride of my life with my voice and vision."

Madonna Celebrated Her Birthday With Rare Photos of Lourdes Leon

"With her singular gift of creating art that is as accessible as it is boundary-pushing, she has shaped our culture in a way very few others have," Langley said.

Producer Amy Pascal is also connected to the project — and Madonna. The two worked together on A League of Their Own back in 1992. In addition to that film, Madonna has starred in Evita, Dick Tracy, The Next Best Thing alongside BFF Rupert Everett, Swept Away, and had a cameo in the James Bond flick Die Another Day.

Behind the camera, Madonna has directed two feature-length films: 2008's Filth and Wisdom and W.E., which took home a Golden Globe in 2011. She also co-wrote both films. Away from Hollywood, Madonna's managed to grab the title of highest-grossing solo touring artist of all time, sold 335 million records worldwide, and is the best-selling female music artist of all time. 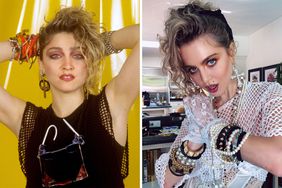