Did Lucy Hale Manifest Her Reported Relationship with Colton Underwood?

A resurfaced video from 2018 seems to prove the theory to be true.

Lucy Hale and former Bachelor Colton Underwood are reportedly dating — and while the pairing may seem unexpected, the actress might have predicted their alleged romance years ago.

In a resurfaced video from 2018, Hale had nothing but nice things to say about the reality star when he was chosen as the show's next leading man. "I'm super excited that Colton's the Bachelor," she told People at the time, before showering him with compliments. "He's wholesome. He's a good guy it seems like. He's really beautiful to watch."

A source at E! News also appeared to confirm the manifestation theory to be true, revealing that "Lucy has always been a fan and interested in Colton," and now the feelings "are mutual between the two."

According to the insider, Lucy and Colton have gone several dates, but they're taking things slow. "It's nothing serious but they are both interested in each other. Colton has spent time at Lucy's house these past couple of weeks and they have gone on a few casual dates," the source explained. "It's all very new but they have known each other for a while through mutual friends."

Back in May, Colton and Bachelor contestant Cassie Randolph ended their relationship after dating for more than a year. Following the news of the split, TMZ reported that Lucy reached out to Colton, which resulted in a few "casual hike dates" around Los Angeles. This week, the pair were photographed walking at the Paseo Miramar Trail in the Pacific Palisades.

Still, the relationship remains unconfirmed by both Lucy and Colton. 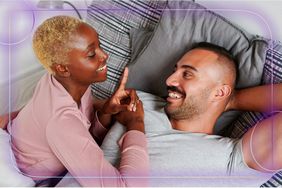